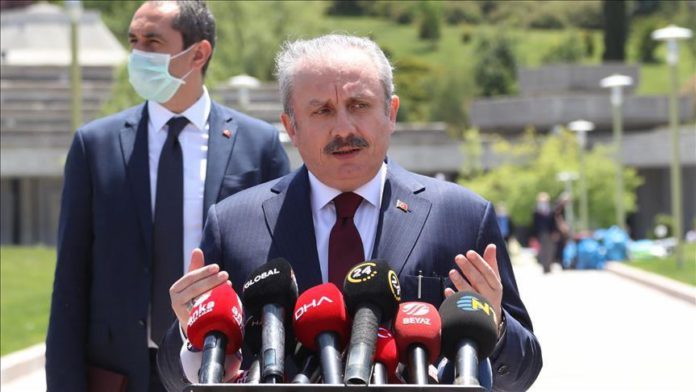 Turkey’s speaker of parliament on Friday defended the revocation of the seats of three opposition lawmakers.

“Shouldn’t we read out the decisions in parliament on these friends that were, in the end, made final in the Court of Appeal?” Mustafa Sentop asked reporters on Friday, referring to a lawmaker from the main opposition Republican People’s Party (CHP) and two others from the Peoples’ Democratic Party (HDP).

Arguing that these rulings complied with the constitution, Sentop said accusations that ulterior motives were behind the decision amounted to “complete juridical ignorance.”

The former lawmakers were sent to prison early on Friday, a day after the parliament revoked their seats.

The final judgements of the judicial proceedings against CHP lawmaker Enis Berberoglu and HDP lawmakers Leyla Guven and Musa Farisogullari were read out on Thursday in the general assembly.

“The objections [by the opposition] are baseless according to the constitution and [parliamentary] bylaw,” he added.

Sentop also noted that the lawmakers’ individual applications to the country’s Constitutional Court did not prevent the decision to be read out in parliament.

Guven, from the southeastern Hakkari province, was sentenced to six years and three months in prison by a provincial court for “being a member of an armed terror group.”

Farisogullari, from the southeastern Diyarbakir province, received a nine-year sentence, also for “being a member of an armed terror group.”

He was found guilty of leaking footage to a journalist showing National Intelligence Organization (MIT) trucks being stopped en route to Syria in January 2014.