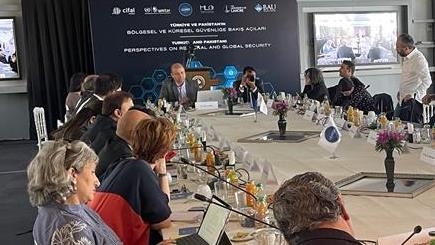 Turkiye and Pakistan need to grab the opportunity to collaborate in varied fields to strengthen solidarity and “carve out their discourse”, a group of experts said on Friday.

“Pakistanis look at Turkiye as a very revered country, so you (Turkiye) must invest on this account and harness it,” said Nazir Hussain, a Pakistani academic, while addressing the first Turkiye-Pakistan Security Dialogue in Istanbul.

Referring to South Asia, he added that academics and scholars from the two countries can carve out a “discourse of their own.”

Researcher Elif Bali Kurtarir from Yildiz technical University said Turkiye’s policy towards South Asia has included humanitarian touch where Ankara has reached out to help in times of disasters and has helped the persecuted like Rohingya.

She said under the “Asia Anew” policy, Ankara was trying to “build new ties and cooperation in the region.”

Rabia Akhtar, a professor at the University of Lahore, and leader of the Pakistani delegation said there were “plenty of common opportunities and challenges that Pakistan and Turkiye can benefit from, and combat together.”

Hussain Shaheed Suhrwardy, professor of international relations at the University of Peshawar, said Pakistan was “living in different circumstances and those on the shores of the Atlantic don’t understand our circumstances.”

He said the Mediterranean region was once the center of power which later then shifted to the Atlantic.

“Amid China’s rise,” he noted, “this power center is coming back to Asia and this superpower status will remain in Asia for centuries to come.”

Esra Hatipoglu from Bahcesehir University said trust and common interest are important issues between any two nations for building relations.

Scanning through Turkiye’s different eras of foreign policy, Hatipoglu said Ankara has played a role of “mediating power between East and West”, citing Istanbul Mediation Conference as an example.

Since 2012, Turkiye has been hosting mediation conferences in Istanbul to harness the growing interest in the peace-making agenda in general and mediation in particular bringing together experts and practitioners to exchange knowledge and practices in mediation.

Describing Turkiye’s foreign policy as a combination of three elements “reinforce, renewal, and forward-looking”, she said Ankara was “pursuing a double-track foreign policy.”

“Ankara relatively enjoys independent foreign policy which is a regional and middle power and a game-changer,” Hatipoglu said, Turkiye has to “increase its self-sufficiency and invest in the defense industry.”

She said Turkiye is conscious of interdependence, connectedness, and solidarity in international politics, while at the same time humanitarian issues and developmental aid continue to remain the number one priority.

Tolga Sakman, who leads the Istanbul-based thinktank Center for Diplomatic Affairs and Political Studies (DIPAM), said Turkiye’s membership in NATO was an “advantage” for the multi-national security alliance.

“It is an antidote to claims that NATO is an alliance of Christians… presence of Turkish troops in Muslim areas is less disturbing,” he argued.

He said in the attempts where the Joe Biden administration wants to use NATO as a bulwark against Russia and China, “securing Turkiye’s cooperation is important.”

Turkiye is the second-largest military in the NATO, he said, “necessarily contributing to NATO’s overall capability and is participating in almost in all NATO missions.”

However, he warned the current situation will lead to “asymmetrical warfare blend with hybrid warfare, arms race, nuclearization, multiplied insecurity as a new world order is taking shape.”

Referring to the presence of many non-state actors in Afghanistan, he warned Pakistan cannot remain aloof from the Ukraine conflict.

Because of proxy wars, he argued, “Pakistan can’t disassociate from the Ukraine war.”

He said the top priority of Russia, China and Pakistan are to see stability in Afghanistan and turn the war-torn country into a transit country.

“The three countries want to turn a war zone into an economic zone,” he said, referring to investments made by the Chinese in railways of the country while arguing Pakistan’s evolving relations with Russia are undergoing a “positive trajectory” in national, regional and international levels.

– Quad is likely to turn into a military pact like NATO

Adil Sultan, a Pakistani expert on nuclear studies said the loose security alliance between the US, Japan, Australia, and India was likely to “turn into a military alliance like NATO.”

Referring to the change in nomenclature of Asia-Pacific to Indo-Pacific, he said the term was first used by Australia while China-US “rivalry has given more credence to this term.”

He, however, said that China’s “leadership role will remain uncontested” in Asia while all Quad “partners have diverse interests.”

As the US wants India to play a leading role to contain China, the Pakistani nuclear studies scholar said Washington and New Delhi have signed at least four agreements “leading to interoperability of the two militaries.”

“India thinks this cooperation (with the US) will help it against perceived Chinese threat but history does not tell us about any such threat,” he said.

“We need to look into our weaknesses and then have strength both in economic as well as in the military,” he said.

Regretting “double standards” in international politics, Khalid Banuri from Pakistan, told the conference that Kashmir should be studied as an “international armed conflict” and “not merely” as a human rights issue.

Banuri, a former air force official said: “Kashmir is a case of alien occupation and Kashmiri struggle needs to be seen through war crimes issue.”

Accusing India of changing Muslim-majority demography in the UN-designated disputed territory, he said: “international law, as exemplified by the situation in Kashmir, is losing its relevance.”

Mian Imran Masood, a Pakistani politician, said Turkiye and Pakistan should also raise the issue of the rights of citizens, the role of the UN, and the future of children.

Expressing concern over the “rights” of the citizens of the world, he said: “Foreign policies are based on local issues of a nation which are not static and vary from age to age.”

He said Palestine and Kashmir were the “biggest challenge to champions of democracy and human rights.” He said the international community needs to face tough questions.