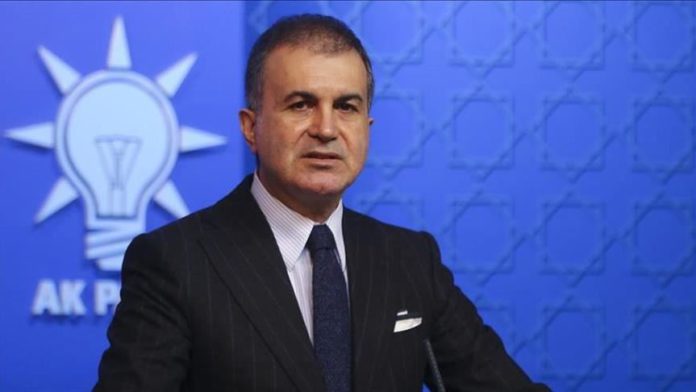 “Immoral, antihuman and fascist…,” Omer Celik, the spokesperson of Turkey’s ruling Justice and Development (AK) Party, wrote on Twitter in response to the post, along with the hashtag #TerroristGeertWilders.

“While fascists like Geert Wilders attack our president, their intention is to shed the blood of the oppressed in Syria and Libya, and to commit Hitler’s cruelty to the Jews in Europe to Muslims,” he said. “Our president is not allowing this fascism.”

Wilders, known for his anti-Islam stance, is the chairman of the Party for Freedom (PVV), and was found guilty of insulting a minority group during his 2014 election campaign in September.

“When truth spoken to their faces Europe’s loser racists showed up again. Trying to exploit Islamophobia and xenophobia. Time has come to stop Europe’s spoiled politicians with fascist mindset,” Cavusoglu wrote on Twitter.

“Europe is an increasingly dangerous place for Muslims. The dog whistle politics of offensive caricatures, accusations of separatism against Muslims, and mosque raids isn’t about freedom of expression,” Altun tweeted.

“It’s about intimidating and reminding Muslims that they are welcome to keep the European economy going, but they will never belong — against the backdrop of lectures about integration.”

“Everything we see about Muslims in European public culture today is eerily familiar to the demonization of the European Jewry in the 1920s,” Altun said. “Some European leaders today do not just target Muslims in their midst. They attack our sacred values, our scripture, our prophet and our political leaders — our way of life.”

He said Europe’s hostility toward Muslims and efforts to “discipline” them is inseparable from the increasingly widespread hostility “toward Islam, Turkey and our President Recep Tayyip Erdogan.”

“Here’s what those Europeans need to understand: Muslims won’t go away because you don’t want us. We won’t turn the other cheek when you insult us. We will defend ourselves and our own at all costs,” he said.

Erdogan has warned that Europe is preparing its own end amid rising hatred towards Muslims and Islam across the continent.

His remarks came after French President Emmanuel Macron accused Muslims of “separatism” and described Islam as “a religion in crisis all over the world.”