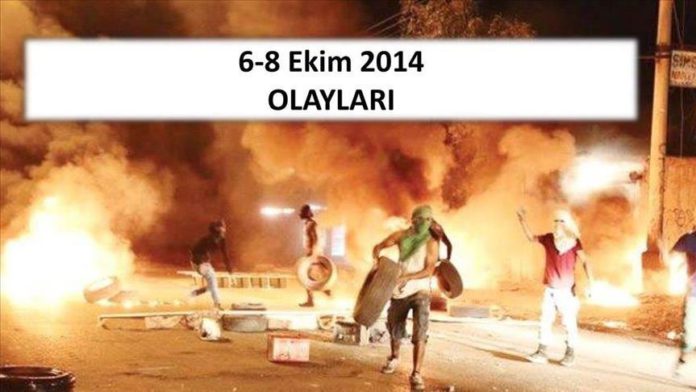 Turkish security and judicial authorities maintain their operations and investigations against the perpetrators of the deadly 2014 terror incidents that erupted after ringleaders of the PKK terror group, their political extensions, and affiliated supporters incited armed violence on Oct. 6-8 simultaneously across the country, including Friday’s arrest warrants for some 82 people, said state security officials.

According to an Interior Ministry statement, Turkey has spent the past four decades battling the PKK terror group, which has offshoots in neighboring countries including the YPG/PYD in Syria and PJAK in Iran, while PKK terrorists also have a presence in northern Iraq’s mountainous regions.

The terror group used the power vacuum in Syria in the wake of the start of the deadly civil war in 2011 to manipulate regional developments, eventually gaining territory in the war-torn country. Its Syria branch the YPG sought statehood in northern territories, establishing cantons called Afrin, Ayn al-Arab (Kobani), and Al Jazeera, the statement said.

Encouraged by developments in northern Syria, the terror group adopted a new strategy in Turkey and sought to weaken the Turkish state by disrupting its unity in an effort to gain territory in line with its separatist agenda.

In this regard, the terror group founded new organizations labeled the so-called YDG-H (Patriotic Revolutionary Youth Movement), OSB (Self-Defense Units) and YPS (Civil Defense Units) to turn settlements in eastern and southeastern Anatolia regions into canton-like structures in Syria, and transferred terrorists from the countryside to the cities to support these structures.

The ministry said terrorist PKK ringleaders such as Abdullah Ocalan, Murat Karayilan, and Cemil Bayik, along with their political extensions, instructed militants and terrorists as well as their ideological supporters to take to the streets and rebel against the Turkish state on the pretext of the Daesh/ISIS attack on the Syrian border city of Ayn al-Arab (Kobani) in 2014.

Meanwhile, the Central Decision Executive Board of the Peoples’ Democratic Party (HDP) – a party Turkey has said is linked to the terrorist PKK – made a statement dubbed “emergency call to our people”, saying: “We call on our people to go out and support those who went out to protest the AK Party’s [Turkey’s ruling Justice and Development Party] embargo attitude towards Kobani.”

The violence triggered material losses totaling billions of Turkish liras (millions of dollars) as 197 schools were burned down, 268 public buildings were destroyed, and 1,731 houses and workplaces were looted or damaged. Furthermore, 1,230 vehicles were rendered unusable.

The Turkish state took action immediately after the start of the events and established public order without delay.

In its statement, the ministry added: “The most important constitutional duty of the State is to arrest the criminals and especially the members of the terrorist organization who were involved in the Oct. 6-8, 2014 Kobani incidents aiming to eliminate the sovereignty of the state, who led with their statements/instructions, who killed or injured our citizens, destroyed families, burned/destroyed vehicles and buildings as a result of these events, and hand them over to the judicial authorities.”

On Friday, Turkish prosecutors issued arrest warrant for 82 suspects over the terror incidents of 2014; among the arrested suspects are some former HDP officials accused of inciting the violence.