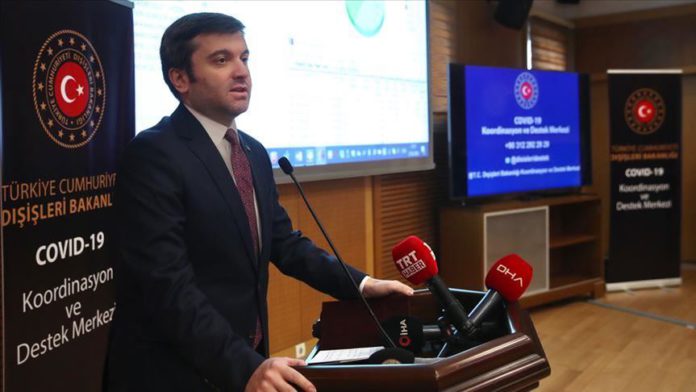 A senior Turkish diplomat on Thursday urged dialogue and cooperation between the country and the EU on the Eastern Mediterranean as a way to contribute to security, stability and prosperity in the region.

Deputy Foreign Minister Yavuz Selim Kiran was speaking at the International Conference on the Eastern Mediterranean, organized by Turkey’s Communications Directorate, after making a presentation on Turkey’s priorities in the region, as well as its vision of fairness and cooperation.

Dialogue between Turkey and the EU is crucial for the Eastern Mediterranean, said Kiran at the videoconference, urging Brussels to weigh the potential geopolitical profits and losses from its policies on the matter.

He expressed hope that the upcoming EU Leaders Summit next week in Brussels would pave the way for positive change, stressing that the Eastern Mediterranean is a strategic gateway to the Middle East and Africa with 30% of global maritime trade taking place there.

Kiran underlined that Turkey aimed for the Eastern Mediterranean, which has been experiencing instability and conflicts for a long time including the Syrian crisis and Cyprus dispute, to be a region of cooperation, adding that this would benefit all Mediterranean littoral countries.

He underlined that Turkey’s main goals in the Eastern Mediterranean are to delimit maritime jurisdictions according to international law, protect continental shelf rights, ensure equal rights for the peoples of Cyprus on offshore resources and make cooperation mechanisms with the involvement of all parties.

Turkey has always advocated dialogue based on fairness in the Eastern Mediterranean, while Greece is trying to expand its maximalist maritime jurisdiction borders, he added.

Kiran urged the EU to abandon its stance on the Eastern Mediterranean exclusively supporting one side, stressing that dialogue would not be possible in the presence of talk on sanctions.

He noted that Turkish President Recep Tayyip Erdogan had called for a regional conference with all parties having interests in the Eastern Mediterranean, including the Turkish Republic of Northern Cyprus (TRNC).

In promoting dialogue in the Eastern Mediterranean, Turkey is also looking for a permanent and comprehensive solution in Cyprus, he added.

Turkish Cypriots are also the co-owners of Cyprus, Kiran said, adding that the Greek Cypriot people could not act as the island’s sole owner and should share power and wealth with the Turkish people.

All sides can benefit from the Eastern Mediterranean’s energy potential through cooperation, he asserted.

In his opening remarks over the videoconference, Communications Director Fahrettin Altun said Turkey, under the leadership of President Erdogan, has always advocated diplomacy on the issue.

“We welcome the opportunity to engage in exploratory talks with Greece — because you can’t go wrong with diplomacy. We must de-escalate tensions in the Eastern Mediterranean and maintain the momentum towards a fair and lasting solution,” Altun said.

He noted that despite attempts to reduce the Eastern Mediterranean question to a bilateral dispute, the matter was not solely between Turkey and Greece.

“We hope to de-escalate tensions and turn the area into a basin of peace and stability,” Altun added.

Turkey, the country with the longest coastline on the Mediterranean, has sent drill ships with a military escort to explore for energy on its continental shelf, saying that Turkey and the TRNC also have rights in the region.

‘Pointless to appoint UN special representative to Cyprus for now’