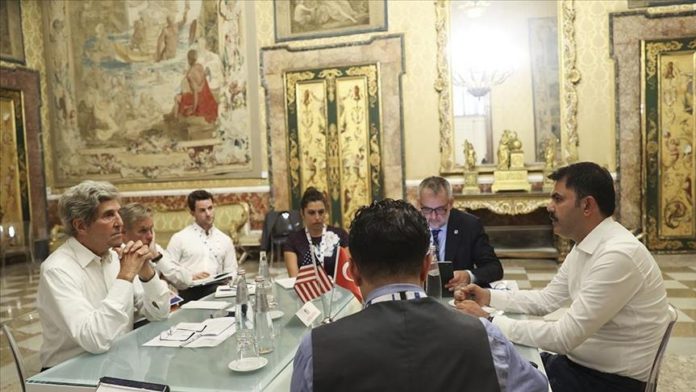 Turkey’s environment and urbanization minister reiterated Ankara’s request to be removed from a UN climate change list on Friday and obtain just economic aid to execute the 2015 Paris Climate deal.

Murat Kurum discussed climate change with the US presidential envoy for climate along with European Commission’s executive vice president and German deputy environment minister separately as part of a G20 meeting in Naples, Italy.

Kurum and John Kerry met Thursday in the Italian city where they attend a meeting of environment and energy ministers from the Group of 20, the Turkish minister said on Twitter, sharing photos from the meeting.

“As one of the countries that have felt the effects of climate change … we said that we have taken more decisive steps than many countries, although we have little historical responsibility for climate change.”

He said he reiterated Turkey’s request to be removed from the Annex-1 list of the UN Climate Change Convention to make “our fight against climate change more effective and to have access to climate finance, and we expressed that we expect their support for our just struggle.”

The Turkish minister said he underlined that the signing of the memorandum before the 26th UN Climate Change Conference of the Parties (COP26) in Glasgow on Oct. 31 and Nov. 12, will be “a step that will speed up the Paris Agreement process for us.”

The Paris Agreement, spearheaded by former US President Barack Obama and Chinese President Xi Jinping, and signed by 195 countries in April 2016, aims to fight climate change by reducing carbon emissions and limiting global temperature rise to below 2 degrees Celsius.

In 2016, Turkey signed the agreement to fight climate change but has not yet ratified it.

In 2018, Mehmet Emin Birpinar, Turkey’s chief negotiator for climate change talks, complained about “unfairness” toward Turkey. As part of the deal, Turkey cannot benefit from international funds to combat climate change, he had said.

“We agreed to hold a comprehensive meeting as soon as possible for a high-level dialogue — which is important in the field of climate change — between Turkey and the EU,” wrote Kurum.

In the meeting, where support was requested for Turkey’s removal from the Annex-1 list of the Paris Agreement, it was emphasized that Turkey and the EU should make a joint effort to combat climate change.

During the 30-minute meeting, the two ministers emphasized the importance of Turkey-Germany relations.

While conveying projects carried out in Turkey to fight climate change, Kurum pointed out that necessary arrangements were made in Turkey within the framework of the EU’s Green Deal.

It was stated that Turkey wanted to be removed from the Annex-1 list.

Under this initiative, known as the Green Deal, the bloc aims to be climate neutral by 2050.

The action plan, released by the Trade Ministry on Friday, includes 32 objectives and 81 actions in nine categories to power Turkey’s transition to a more sustainable, greener economy in line to make Europe the first climate-neutral continent by 2050.

*Yasemin Kalyoncuoglu in Naples, Italy contributed to this story.

Police seize over 180 kg of heroin in eastern Turkey