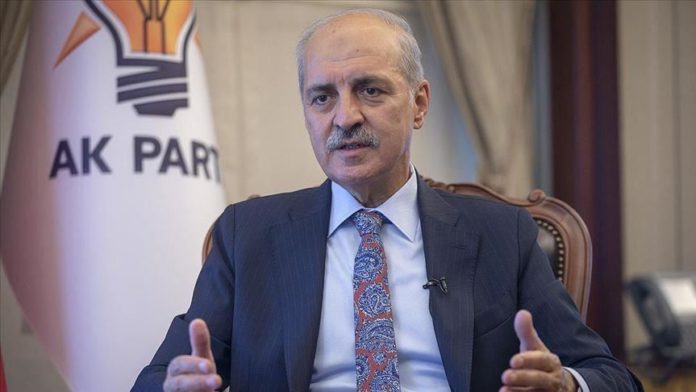 A senior member of Turkey’s ruling party on Tuesday added to Ankara’s scathing protests to critical remarks made by US presidential hopeful Joe Biden that recently went viral in the country.

Such statements are illogical, inconsiderate and outside of political decency for a person who seeks to become the leader of a country, said Numan Kurtulmus, the deputy chairman of the Justice and Development (AK) Party.

In an exclusive interview with Anadolu Agency, Kurtulmus criticized the controversial comments about Turkey voiced by the presumptive Democratic nominee.

Kurtulmus said that with his remarks, Biden had confessed that he sought to topple Turkey’s President Recep Tayyip Erdogan from office.

Recent history has shown that using “side roads,” like coups, public perception manipulation and external intervention in elections to change the government would fail miserably, Kurtulmus argued.

He urged Biden to understand from the reactions from Turkey to his remarks that he should avoid involving himself in domestic politics in the country.

In footage recorded last December, Biden told the New York Times editorial board that the US could support opposition elements in Turkey to change the tide of political developments.

Biden’s remarks drew condemnation from the entire political spectrum in Turkey, including both the government and opposition.

Biden is currently ahead in most US polls, with the Nov. 3 presidential elections still months away.

On recent developments in the Mediterranean Sea, Kurtulmus said Turkey had determined and registered the areas under its sovereignty and within its exclusive economic zones in the Eastern Mediterranean via treaties according to international law.

Turkey will never give up its rights in the Mediterranean and will continue to search and drill in the region, he added.

“Now, others may try to change this through different variations, but Turkey, while keeping the negotiation table and talks open, will continue to actively pursue its work there [Eastern Mediterranean], as we are doing with the Oruc Reis and Yavuz,” he said, referring to two of Turkey’s seismic research vessels currently deployed in the region.

“We will not allow anybody to intervene. This, we say clearly.”

In the first week of August, Turkey resumed energy exploration efforts in the Eastern Mediterranean after Greece and Egypt signed a controversial maritime delimitation deal.

But after declaring the Greek-Egyptian deal “null and void,” Turkey authorized its drill ship, the Oruc Reis, to continue its activities in an area within the country’s continental shelf.

The ship will continue its two-week mission until Aug. 23, along with the vessels Cengiz Han and Ataman.

Turkey has also said energy resources near Cyprus must be shared fairly between the Turkish Republic of Northern Cyprus (TRNC) — which has issued Turkish Petroleum a license — and the Greek Cypriot administration of Southern Cyprus.

President Erdogan said the only solution to the dispute was through dialogue and negotiation, urging Athens to respect Turkey’s rights.

Pivoting south to peace efforts in Libya, Kurtulmus asserted that Turkey supported the rightful and legitimate side in Libya, referring to the internationally recognized government based in Tripoli, the capital of the North African nation.

He added, however, that other countries assisted putschists who wanted to eliminate the government, namely renegade general Khalifa Haftar.

Kurtulmus highlighted that those who supported Haftar, whom he accused of seeking to turn the lives of Libyans into a prison, are the main source of problems in the country.

Libya has been mired in strife since operations led by NATO to overthrow former strongman Muammar Gaddafi in 2011.

The new government was founded four years later in 2015 under an agreement led by the UN, but efforts for a long-term political settlement have so far failed due to a military offensive by Haftar.

Since April 2019, Haftar’s forces have launched attacks on Tripoli and other parts of northwestern Libya, resulting in more than 1,000 deaths, including civilians. Haftar has the support of the UAE, Egypt and Russia while the government is backed by Turkey and Qatar.

Stressing the importance of unity in the Muslim world, Kurtulmus said Muslims around the world should act in tandem on the Palestinian cause.

Unfortunately, the issue of Palestine has been turned into a bargaining chip for some countries, he said, alluding to a recent agreement between the UAE and Israel to normalize relations between the two countries.

On a separate ruling in Israel to imprison Palestinian resistance icon Sheikh Raed Salah, Kurtulmus said Tel Aviv would increase its pressure from now on.

Last week, Israel and the UAE announced it was establishing full diplomatic relations in a US-brokered deal that will see the Jewish state postpone plans for annexation of land it illegally occupies in the West Bank that is sought by the Palestinians for their future state.