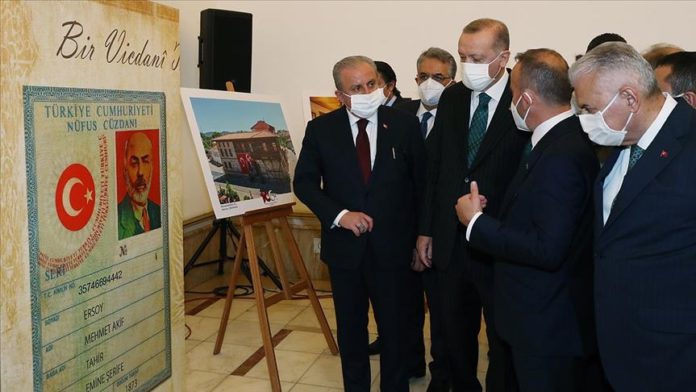 Turkey’s national anthem is not only a symbol of its independence but also a text of national consensus bringing people together, the country’s president said on Wednesday.

“Our national anthem, of which we will mark the 100th anniversary on March 12, is a reminder of our sense of belonging, independence and future,” Recep Tayyip Erdogan told the opening ceremony of the March of Independence exhibition in parliament in the capital Ankara.

Paying a tribute to Mehmet Akif Ersoy, the writer of the lyrics of Turkey’s national anthem Istiklal Marsi, or March of Independence, Erdogan said Ersoy was undoubtedly among the pivotal figures of the country in the last century.

“Mehmet Akif [Ersoy], one of the symbols of our struggle for independence and our tradition of scientific knowledge, earned an exceptional place in the hearts of our beloved nation with his eternal works, combative personality, profound knowledge, and exemplary ethics,” he said.

Erdogan also said a small part of the society feels uncomfortable while singing the national anthem, adding that they do not hesitate to show their discomfort openly.

It is clear that they have a problem with the country’s independence and future, he stressed. “However, despite them, we continue to cherish our independence,” the president added.

On Turkey’s fight against terrorism, Erdogan said just as it rejected the unfair Treaty of Sevres a century years ago, Turkey will not bow down to modern Sevres being pushed by the terror groups of Daesh/ISIS, YPG/PKK, Fetullah Terrorist Organization (FETO).

The Treaty of Serves, which was an unfair pact imposed on the Ottoman Empire after the World War I, was replaced by the Treaty of Lausanne — signed by Turkey on one side and Britain, France, Italy, Greece, and their allies on the other — recognizing the modern Turkish state.

Turkey’s parliament approved a motion announcing 2021 as the year of the Turkish national anthem. In 2021, Turkey will mark the 100th anniversary of the March of Independence.

The Turkish national anthem was written in 1921 during the War of Independence as Turkey battled occupation by foreign forces after the World War I.

It was penned in order to encourage the fighting army and to motivate the struggling nation. It is also the official anthem of the Republic of Turkey, founded two years later in 1923.

The anthem, consisting of 41 lines and 12 quatrains, centers around timeless themes such as independence, war, civilization, faith, spirituality, courage, heroism and hope.