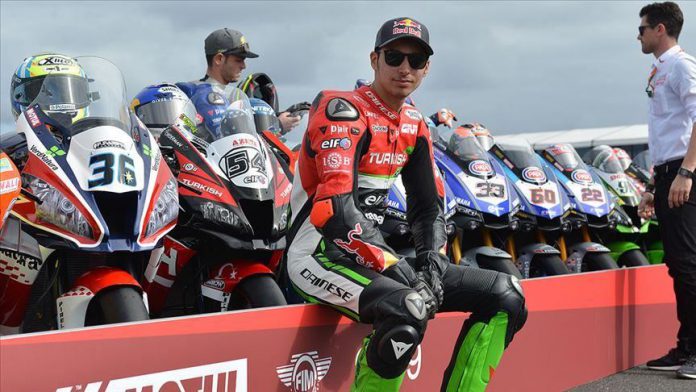 Turkish motorcyclist Toprak Razgatlioglu has been looking forward to racing for his new team Yamaha.

He will represent Turkey in the 2020 Superbike World Championship.

Razgatlioglu said that he works hard to achieve important accomplishments and benefits form the experience of former Supersport World Champion Kenan Sofuoglu in his career planning.

Expressing his enthusiasm for joining Yamaha, the motorcyclist said: “I will be faster with Yamaha during the new season.”

“I believe that I will gain precious successes in Yamaha,” he added.

He also said the team authorities welcomed Razgatlioglu as a “young talent”.

“I will test-drive my new motorbike in Spain for the first time this week and I will have the opportunity to ride my motorcycle,” he said.

Razgatlioglu clinched the first spot in the Superbike World Championship race in France on Sept. 28, becoming the first Turkish athlete to gain the title.

This summer Razgatlioglu quit the Kawasaki Racing Team after being left out of Suzuka’s 8-hour endurance race.

Kawasaki had three riders in the 8-hour endurance race in July — Northern Ireland’s Jonathan Rea, England’s Leon Haslam, and Razgatlioglu, who never got a chance to ride.

Kawasaki Racing Team was declared the Suzuka 8 Hours 2019 winner even though their rider Rea was unable to reach the finish line after a very late crash.