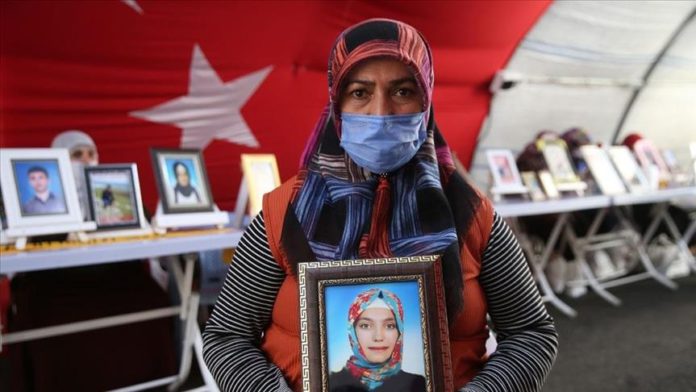 Families staging a sit-in in southeastern Turkey against the PKK terror group called on their sons and daughters on Friday to surrender to Turkish security forces.

The protest outside the Diyarbakir office of the Peoples’ Democratic Party (HDP), which the government accuses of having links to the PKK, began on Sept. 3, 2019 when three mothers said PKK terrorists forcibly recruited their children. It has been growing since then.

Fatma Akkus, a mother whose daughter was abducted and taken to the mountains six years ago, said she is determined to continue the protest.

“I hope my daughter will come home this Ramadan feast. I want my daughter from the HDP and the PKK. HDP took my daughter and handed her over to the PKK,” she said.

She added: “I know my daughter is in Syria and alive. However, I have not been able to make contact with her so far. I saw my daughter on a video clip on the internet.”

Urging her PKK-abducted daughter to lay down arms, Akkus said: “They took the pen away from you and gave a gun. Do not use that gun against anyone. My daughter, run away, come and surrender.”

Yusuf Erdinc, who came from the eastern Van province to join the sit-in, said his son Mikail was abducted by the HDP six years ago.

He said he will not leave without his son Mikail, adding: “Their children are in Europe but they are taking you to the mountain. You don’t belong there, your home is Turkey.”