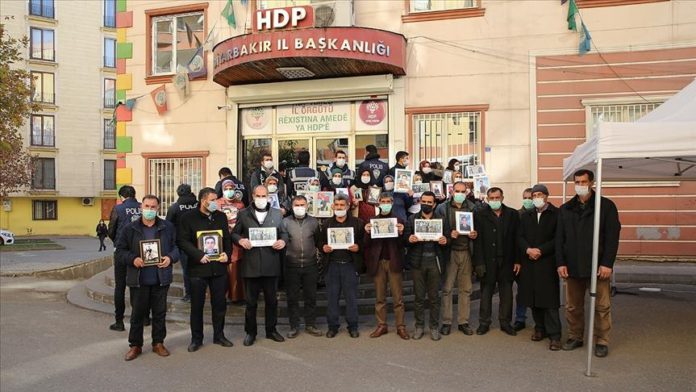 On the 486th day of a sit-in protest in southeastern Turkey against the YPG/PKK terrorist group, parents on Thursday condemned a recent European Court of Human Rights (ECHR) ruling that called for the release of a former co-leader of an opposition political party accused of terror links.

The protest in Diyarbakir province outside the offices of the Peoples’ Democratic Party (HDP) — which the government accuses of having links to the YPG/PKK — began on Sept. 3, 2019 when three mothers said their children had been forcibly recruited by YPG/PKK terrorists. It has been growing since then.

Speaking for the demonstrators, father Suleyman Aydin underlined that no HDP deputy in the past 486 days had given their support to the families.

“ECHR, you want the release of [Selahattin] Demirtas. Demirtas is intertwined with the PKK. It’s Demirtas who takes our children to the mountains and acts as a middleman,” Aydin said.

In November 2016, Demirtas and 12 HDP lawmakers were arrested on terrorism-related charges. In September 2018, he was sentenced to four years and eight months in prison for spreading terrorist propaganda, leading a terrorist group, and inciting public hatred and hostility.

The ECHR ruled earlier this month that the arrest violated his freedom of expression and right to participate in elections, depriving Demirtas of his rights to liberty, security, and freedom of choice.

The court also urged Turkey to take measures to release Demirtas, and ruled that Ankara should pay him a total of €60,000 ($73,641) in damages.

HDP, PKK one and the same

Aydin accused the HDP of being responsible for abducting children to the PKK, asserting that the political party was one and the same with the EU and US-listed terror group.

“These people aren’t fighting for the Kurds, they’re using the Kurds. […] HDP members of parliament, your children are in Europe but you’re dooming the children of Kurdish families to die in caves,” he said.

“We vehemently condemn the decision of the ECHR. The ECHR is discriminating for the purpose of causing trouble in Turkey […] If they want the release of Selahattin Demirtas, they should first demand that the PKK release the children of Kurdish families. Isn’t it a crime to send 14-15 year-old children to the mountains? Where are their human rights? Where is their constitution?” Aydin said.