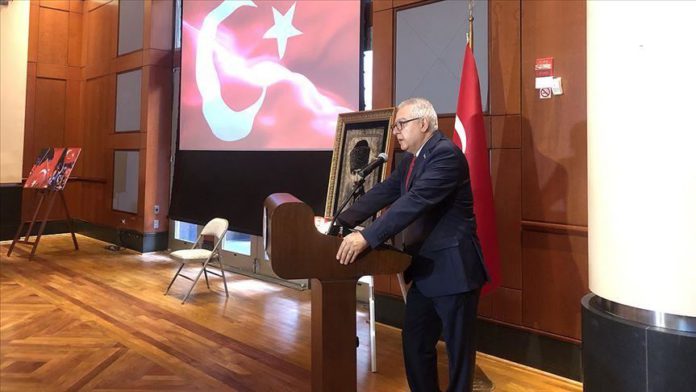 Turkish missions in the US on Wednesday marked the fourth anniversary of the July 15, 2016 deadly coup attempt in Turkey by the Fetullah Terrorist Organization (FETO).

The Turkish embassy in Washington, DC and Turkey’s Permanent Representative to the UN with the Consulate General in New York held separate events that started with a minute of silence observed in the honor of the victims of the defeated coup, followed by the singing of the national anthem.

In his address the US capital, Turkey’s Ambassador to the US Serdar Kilic said Turkish people showed at the coup night that they “will not allow any external intervention” on their future.

“July 15 is the anniversary of Turkish people’s message that says ‘I do not allow any intervention in my future. I make my own choice for the future of my country, I don’t let anyone impose a preference,'” said Kilic.

Speaking to the reporters following to the event, the ambassador underlined that Turkey sent all essential files to the US on extradition of Gulen and added the review process of American authorities “shouldn’t have taken that long.”

Gulen has lived in self-imposed exile in the US state of Pennsylvania since 1999 and Ankara has been demanding Gulen be extradited to be held accountable for his role in the defeated coup, sending hundreds of folders of evidence incriminating him and his organization.

“Our fight, which we know will be long-lasting, against FETO’s structure abroad will be maintained united and decisively,” Serhad Varli, Turkey’s deputy permanent representative to the UN, said during the event in New York.