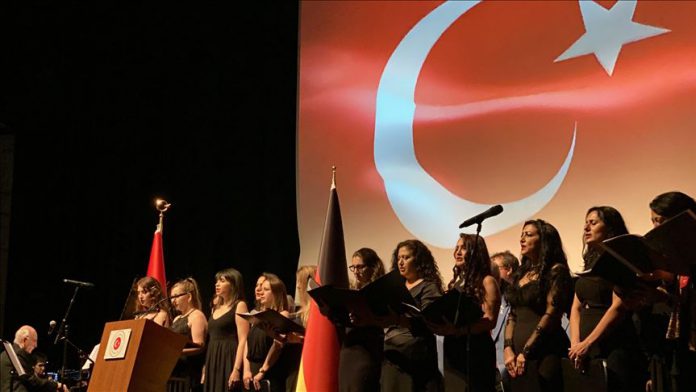 Turkish missions across Europe celebrated the 96th anniversary of the founding of the Republic on Tuesday.

In London, Turkish Ambassador to the U.K. Umit Yalcin hosted a reception offering well-known Turkish delicacies to guests including press workers, businessmen and representatives of foreign missions as well as representatives of the Turkish community in the U.K.

Aydin said the country would continue to fight terror with determination until terrorist groups such as the Fetullah Terrorist Organization (FETO), Daesh and the PKK do not pose a risk for Turkey.

“I, once again, condemn violent demonstrations of terror group supporters and the tolerance and support shown for them,” he said.

Other Turkish missions in Germany including in Munich, Cologne and Nurnberg also celebrated Republic Day with receptions.

In France, Turkish Ambassador Ismail Hakki Musa hosted a ceremony in Paris attended by a number of diplomats, high-level officials and other invitees.

Stressing Turkey’s role in the region, Musa told the guests that the country provides the most humanitarian aid in the world.

In Italy, Turkish Ambassador Murat Salim Esenli hosted an event that was attended by many guests, including high-level officials, Turkey’s ambassador to the Vatican and diplomats.

Five chefs from Turkey’s gastronomic city of Gaziantep prepared a selection of foods for those attending.

A ceremony held in Malta’s capital Valletta by Turkish Ambassador Kerem Kiratli saw a high attendance, including by President George Vella, the head of parliament and ministers.

Missions in Austria, Romania, Greece and Sweden also marked the day with a number of guests and special events.

Russia, Azerbaijan, Uzbekistan, Kyrgyzstan and Georgia were also among the countries where Turkey’s Republic Day was marked.

“We cooperate on many topics and carry out important projects. However, the depth of our relations is not limited to bilateral matters but also includes many issues of great importance in regional and global matters,” Turkey’s Ambassador to Russia Mehmet Samsar told a reception.

At a reception in Azerbaijan’s capital, Baku, Turkish Ambassador Erkan Ozoral hosted many high-level officials and politicians as well as artists.

Parliament Speaker Oktay Asadov said the common history and culture of the two countries — which are defined as “one nation, two states” — is the greatest wealth.

Turkey’s Ambassador to Serbia Tanju Bilgic reminded a reception that 2019 also marks the 140th anniversary of diplomatic relations between the two countries.

“Turkey and Serbia are not connected by a border but by our hearts,” Bilgic said.

The official proclamation of the Turkish Republic by founding father Mustafa Kemal Ataturk took place on Oct. 29, 1923, when the name of the nation and its status as a republic were declared.

The Turkish Grand National Assembly, or parliament, then voted unanimously to make Ataturk, a revolutionary statesman, the first president of the Republic of Turkey.

Since then, Turkey has celebrated Republic Day every year on Oct. 29.