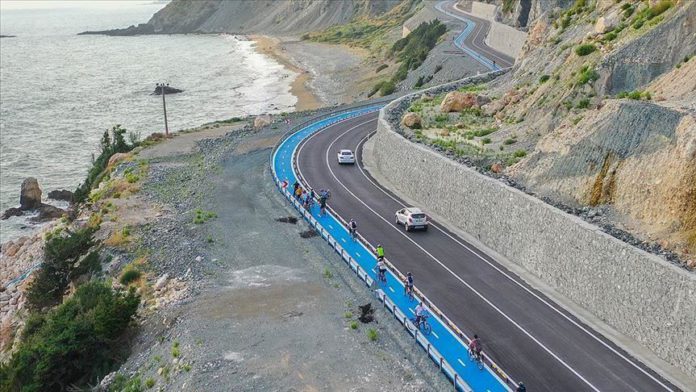 A new 26-kilometer (16-mile) bicycle track in southern Turkey is poised to attract national and international events and to boost nature and sea tourism in the region.

The bike road, which links Samandag and Arsuz, two districts of Turkey’s southernmost Hatay province, had its ribbon cut last month, and is attracting interest for its natural setting as it is situated along the Mediterranean coast.

In addition to attracting tourists to the region, the cycle route is expected to host both national and international cycling events.

“We have built the longest uninterrupted bike path in the world on the Samandag-Arsuz road,” Rahmi Dogan, Hatay’s governor, told Anadolu Agency.

The road caught the world’s attention, Dogan said, hinting: “There will be some national and international activities here in the coming days.”

Dogan said that they got intense demand on social media to set up a bicycle rental system.

The Turkish Green Crescent is expected to donate 50 bicycles to establish the system, he added.

Dogan said that five recreation spots are planned along the bike route and that to do this, they are working with Turkey’s Forestry Directorate.

Describing the route as “one of the most beautiful locations” in the region, Dogan said it fulfilled a 60-year dream for Hatay.

He thanked the Turkish president and Interior Ministry for their support, as the budget to build the road came from the ministry.

“The biggest feature of [the road] is that it’s by the sea and uninterrupted,” he said.

“Here people will enjoy cycling between the sea and the mountains.”