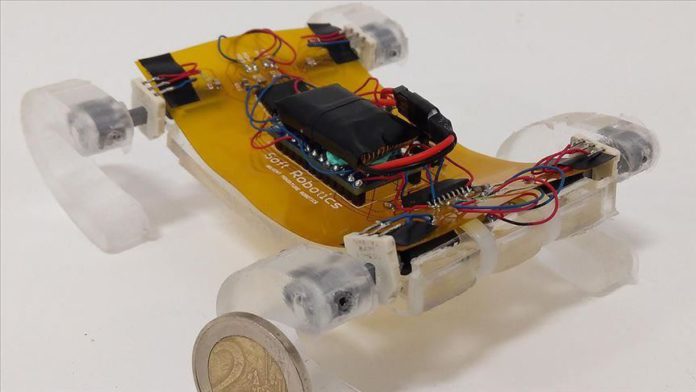 Turkish researchers developed a miniature robot that would save lives in cases of powerful earthquakes or wreckages.

Inspired by the body structure of mice and insects, engineering researchers at Bilkent University in the capital Ankara produced the soft-bodied robot that can squeeze through narrow spaces and overcome obstacles.

Speaking to Anadolu Agency, one of the researchers Onur Ozcan said that over the past 10 years, the traditional robot systems, produced with rigid materials, have been considerably improved, thanks to the smart designs and improvements in their management control system.

Ozcan said they foresee that robots that have wheels or legs will enter into our lives soon. These robots can find their way in irregular environments, move on rough terrain, or even perform acrobatics, he said, and added: “But these mobile robot systems cannot be minimized due to both production-based reasons and requirements of the actuator force.”

Not being able to minimize them cause these robots to reach only the places human beings can reach, he noted.

“But miniature robots are not far in the future. They have advantages such as being cheaper, with fewer materials used in their production. They can also reach small gaps and spaces that humans cannot reach,” he noted.

“One of the biggest disadvantages of the miniature robots, however, is that they have very limited movement ability,” he stressed, adding that this was because of their size and they are not successful in climbing and overcoming obstacles.

“So they’re not good for use on rough surfaces,” Ozcan said.

The researches on robots are mostly focusing on minimizing their size and softening their structures, Ozcan said, and added: “When we examine mice and insects, we can conclude that by passing through small gaps, the multi-jointed and flexible bodies that these animals have — besides being small — contribute greatly both to climbing and crossing obstacles and to reaching areas that are difficult to access.”

He also said they were in this way able to produce the miniature robot with a soft-body that can pass through such places much easier than its peers.

“We succeeded to produce our miniature robot from soft material. So we have demonstrated the robot can take advantage of this flexibility when crossing obstacles just like mice or insects do.”

Together with the research team he leads, they named the robot SQuad, he added.

“Produced from flexible polymers, this robot can overcome much higher obstacles without any problem compared to similar-sized robots,” he said, noting that the robot is four-legged just like the mice.

He said the robot can climb an obstacle that is around one-and-half times higher than its size.

“The size and flexibility of our robot enable it to make its way through narrow spaces smaller than its cross-sectional area and walk on irregular surfaces,” Ozcan added.

The C-shaped legs, he said, also have a great contribution to its success of crossing obstacles.

“The mechanical design phases of the robot has neared the end,” he noted.

The palm-sized miniature robot SQuad is made of polydimethylsiloxane, which is the most widely used silicon-based organic polymer, and its soft legs rotate with direct-current motor.

Ozcan said they conducted a new study that is a first to the literature, and that they combined two designs by integrating direct-current motors which allow minimizing and soft materials which allow crossing obstacles.

“Our robot can be used in search and rescue activities under collapsed buildings after the earthquake or in mining accident scenes, by placing environmental sensors such as microphones or cameras,” he said, adding that it could also be used to inspect hard-to-reach areas such as inside the pipelines, by attaching a camera on it.

The study, supported by the Scientific and Technological Research Council of Turkey (TUBITAK), was shared with the science world as published in the scientific journal of IEEE Robotics and Automation Letter.

* Contributions and writing by Sena Guler.