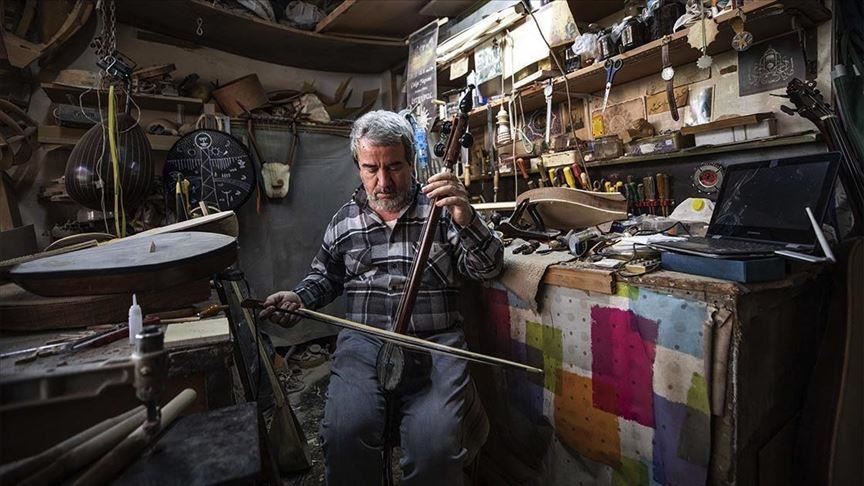 An instrument crafter in Turkish metropolis Istanbul has revived nearly 800 musical instruments that were about to be forgotten over nearly last three decades.

Feridun Obul, a primary school graduate, told Anadolu Agency that he quit fixing roofs after he was impressed with music when he attended a concert 34 years ago.

Since then Obul was engaged in making instruments, and nowadays, he authentically produces musical instruments that are sinking into oblivion.

Although the 20-square-meter (215-square-foot) workshop in an old Ottoman-style inn in Istanbul’s Sultanahmet area — a place also hosting lots of book publishers — resembles a carpentry workshop at first sight, it is actually a place where instruments are produced for the world music market.

The renowned master of musical instruments has been handcrafting the instruments of different nations from four continents across the globe for 27 years.

The luthier first started making similar instruments to the ones left by the band at the concert hall, but later, after mastering craftsmanship, he began producing the forgotten instruments of the Turkish and Shaman music tradition aging thousands of years.

Making use of images, old books, rock paintings, and miniatures while making the instruments, and researching the climate, vegetation, geography, and traditions of people living in the certain region, Obul designs the musical instrument he will make only after having sufficient knowledge about it.

The instrument crafter said he supplies all materials entirely from natural products.

Obul said he uses trees such as spruce, plane, ebony, and walnut in instrument-making, along with various natural materials including horsetail, catfish leather, buffalo heart membrane, and horn to match the authentic form of the instruments.

The musical instruments made by Obul are exhibited in various museums across Turkey, as well as in museums in Hungary, Italy, the UK, Germany, Austria, Azerbaijan and the US.

Emphasizing that he does not limit himself to making instruments of a certain region, Obul said: “The instruments we make vary from the Central Asia all the way to Latin America.”

“We made the instruments [almost] of all countries,” he added.

The Turkish luthier also said that he knows the basics of playing — enough for tuning — each musical instrument he made, adding that he loves all the instruments he made and sees them all “like his own children.”