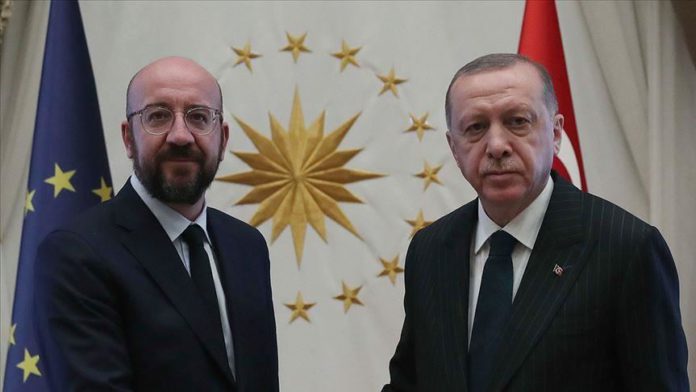 The Turkish president and European Council head on Sunday spoke over the phone to discuss developments in the Eastern Mediterranean and Turkey-EU relations, an official statement said.

Recep Tayyip Erdogan told EU’s Charles Michel that the provocative words and steps of European politicians on regional issues will not serve for the solution, according to a statement by Turkey’s Directorate of Communications.

Erdogan also said the EU’s stance on the Eastern Mediterranean will be a test of sincerity in terms of international law and regional peace.

The Turkish leader urged the EU to fulfill its obligations fairly to prevent the steps of Greece and some EU member states which escalate the tension in the Eastern Mediterranean and Aegean.

Erdogan also called on EU institutions and member states to remain “fair, impartial and responsible in all regional matters.”

Turkey — the country with the longest coastline in the Mediterranean — has sent out drill ships to explore for energy on its continental shelf, saying that Turkey and the Turkish Republic of Northern Cyprus have rights in the region.

Dialogue for fairly sharing these resources will be a win-win deal for all sides, say Turkish officials.

Turkey, US agree on formation of joint mechanism to strengthen bilateral...