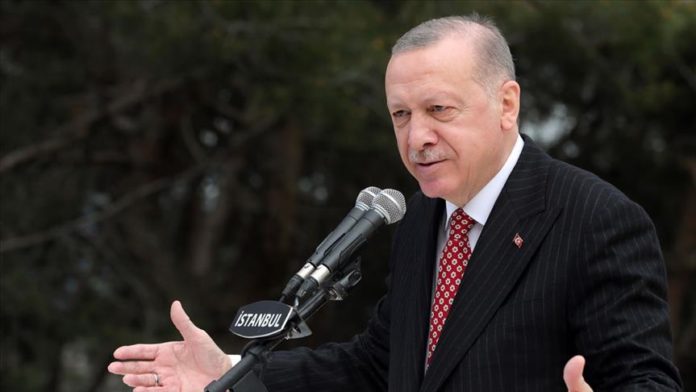 “We’ve been in the struggle to bring our country to its 2023 targets for 19 years,” he said in a ceremony in metropolis Istanbul, adding that the country’s children would carry it even further with a “2053 vision.”

Turkey will mark the centenary of the foundation of the republic in 2023, setting specific progress targets for improvement of the economy, energy, health care, education, and transport.

The 2053 milestone refers to the 600th anniversary of Istanbul’s Ottoman conquest from the Byzantine Empire.

“We’re in an effort to leave our republic, which is approaching its 100th year, to the next generations by growing and strengthening it in every field,” Erdogan said.

He stressed that though the malicious methods of those who seek to divide Turkey and its nation have changed, their intentions have remained the same.

“Every attack targeting this country and nation, from coup plotters to terrorist organizations and economic traps, is the product of the same dirty scenario,” he said.

“May Allah not leave our country obliged to struggle another War of Independence and write another Turkish National Anthem,” Erdogan added.

Standing among children more than a dozen children, Erdogan pressed the button to raise a giant Turkish flag near Istanbul’s Camlica Mosque complex on the country’s tallest flagpole of 111 meters (364 feet).

Due to the coronavirus pandemic, the Turkish nation is celebrating the National Sovereignty and Children’s Day and the 101st anniversary of its parliament’s foundation from their homes under a nationwide curfew.

Delta variant accounts for 83% of US COVID cases as deaths...