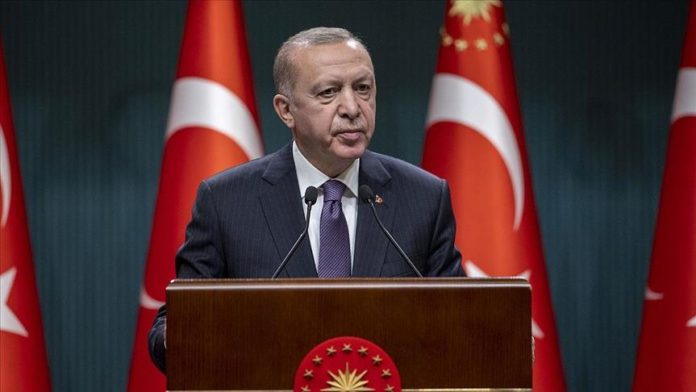 Turkey’s president on Monday denounced US President Joe Biden’s “unfounded” statement on the events of 1915, saying it is “contrary to the facts.”

Addressing a news conference following a three-hour Cabinet meeting in the capital Ankara, Recep Tayyip Erdogan said “US President Biden made a statement that is unfounded, unjust and contrary to the facts about the painful events that took place more than a century ago.”

Expressing his and the Turkish nation’s “immense” distress over Biden’s statement, Erdogan once more stated that the US president’s remarks “have no historical and legal basis.”

“As Turkey, we believe that it is inhumane to contest the sufferings of history,” Erdogan said, reminding that Turkey is the only nation and state that is without rebuke and has a clear and satisfied conscience about its history.

“If you call it genocide, you should look in the mirror and evaluate yourselves,” said Erdogan.

“Investigating historical events and revealing the truth should be left to experts and historians, not to politicians.”

Giving a detailed historical background to the Armenian issue, Erdogan said that until the World War I, the Armenian gangs caused about 40 riots, which got out of control and turned into massacres.

The Turkish leader also said that millions of Turkish and Kurdish civilian population from the eastern Van to northeastern Kars provinces and from the eastern Erzurum province to the central Anatolian region were massacred by the Armenian gangs.

“There are mass graves of Turks massacred by Armenians in many places, but nowhere can you find mass graves belonging to Armenians,” he said.

Erdogan went on saying that prior to the World War I, the records show that a total of 1.3 million Armenians lived in the Ottoman Empire.

“There are over 1 million documents in our archives now. Come in and examine the documents,” he added.

On a proposed joint history commission on Armenian claims, Erdogan said Turkey is yet to receive a response to its offer.

“We have assured researchers of the commission of access to our archives, but other parties have not responded,” he added.

Erdogan underscored that there is “no concrete evidence regarding Armenian allegations nor any international court decision.”

Giving a detailed historical background to the Armenian issue, Erdogan said that until World War I, Armenian gangs caused about 40 riots which got out of control and turned into massacres.

The Turkish leader also said that millions of Turkish and Kurdish civilians from eastern Van province to northeastern Kars province and from eastern Erzurum province to the central Anatolian region were massacred by the Armenian gangs.

‘No human tragedy happened on April 24’

“There are mass graves of Turks massacred by Armenians in many places, but nowhere can you find mass graves belonging to Armenians,” he said.

Erdogan went on saying that prior to World War I, records show that a total of 1.3 million Armenians lived in the Ottoman Empire.

“There are over 1 million documents in our archives now. Come in and examine the documents,” he added.

Regarding the April 24, 1915 incidents claimed by Armenians, Erdogan said: “Nothing happened on April 24 in terms of human tragedy.”

“April 24, 1915 is only the day when the Ottoman Empire shut down [Armenian] organizations such as Dashnak, Hinchak and Ramgavar, which were engaged in activities with countries that were at war with the empire, and arrested 235 administrators of them,” he said.

Noting the relocation and resettlement law was still not introduced on that date, Erdogan said no such casualties from the Armenian side occurred.

“The Armenian community in our country recognized this date as a day of remembrance of their own suffering, in line with the general practice in the world,” he said.

Despite knowing the truth on the events regarding the mentioned date, Erdogan reminded that Turkey still sends a message to those Armenian communities, sharing their pain.

The Ottoman Empire did not send the Armenian population elsewhere, it relocated them within its territory, he said.

“Individuals subject to this law were given a week to prepare, and those who had an excuse were exempted from relocation. Necessary administrative measures were taken during the referral process, and adequate funds were provided to local units in this regard,” Erdogan added.

“Following the arrests made by the Ottoman state on April 24, the relocation and resettlement law was enacted on May 27, and it was put into effect on June 1. The move [by Ottomans] was not taken due to a possible threat or danger, but [it was] rather a measure taken against an actual ongoing rebellion and increasing massacres [by Armenian gangs],” he said.

The Turkish president further recalled that the mentioned dates also coincide with the Ottoman Empire’s historical struggle on many fronts, especially in Canakkale.

“Due to full mobilization, almost all of the men were at the battlefield, and those vulnerable women, children and the elderly were left behind. Armenian gangs not only clashed with the Turkish army or the armed Turkish guards protecting their districts but also massacred innocent and defenseless people,” he added.

Saying that the Armenian gangs massacred defenseless civilian Turks and Kurds in Anatolia and the Circassians on the Caucasus side, Erdogan said: “Armenian gangs boasted about the massacres they committed and forcing hundreds of thousands of people to migrate.”

“Many documents related to this are available in the archives of the countries of the region,” he added.

He further stressed that “with the relocation and resettlement law, the Ottoman Empire decided to temporarily send the Armenian population, on which the gangs who committed these massacres were based, to other regions. Moreover, this decision did not cover all Armenians in the country, but only the Armenian population in places where gang attacks were intense.”

On the number of losses during the relocation and resettlement process, the Turkish president said that according to records, only 150,000 people lost their lives either due to virus outbreaks, public order problems or fighting with security forces.

– ‘If you call it genocide, you should look in the mirror and evaluate yourselves’

“Of course, each of these 150,000 people are a soul and are important,” he said, adding that “Armenian historians and politicians themselves admit that the actual numbers are exaggerated with an additional zero.”

“Again, Armenian historians state that most of the losses were experienced during the wars at the front,” Erdogan said.

Turkey’s president continued on, saying that the current Armenian population in Istanbul alone is 100,000.

“This number [of the Armenian population] at one time reached 650,000 with those returning after the war. I guess people would not voluntarily return to a place where they experienced a massacre, genocide, Mr. Biden,” Erdogan said.

On Armenia’s 30-year-long occupation of Upper Karabakh, Erdogan called on Biden and reminded him of the Organization for Security and Co-operation in Europe (OSCE) Minsk trio, namely the US, France and Russia.

“You did not rescue the people there from this occupation for 30 years, and unfortunately, more than 1 million Azerbaijani brothers and sisters had to migrate from there. All of Karabakh was destroyed and burnt down. If you call it genocide, you should look in the mirror and evaluate yourselves,” he said.

Saying there are many occurrences that can be identified as genocide in US and European history, Erdogan said: “From Native Americans to Black people, from incidents in Germany’s Dresden city to [the nuclear] bombs dropped on Japan, from Vietnam to Iraq, these subjects can be opened to discussion.”

He said the US and Europe not only displayed hostility towards Turkey with such an attitude but also betrayed science.

Stressing that Turkey did not and will never forget the attacks by Armenian terrorist groups such as ASALA in the 1970s against Turkish diplomats, Erdogan said Turkey is aware of how the murders of the Turkish diplomats are protected and how the culprits were released from prisons.

He emphasized that Turkey also realizes that similar ambitions of Armenian terrorists are trying to be implemented through the PKK terrorist organization.

“Allegations such as genocide are too sensitive to be the subject of politics. Leaving aside the science of history, the presidents and parliaments of the countries making judgments on such matters will only make things complicated,” Erdogan said.

On Turkey-US relations, President Erdogan said that relations between the two countries have closely been based on an understanding of a “trustful ally.”

He said relations between the two long-standing allies have been harmed due to the US’ supportive position on the Fetullah Terrorist Organization (FETO) and the PKK/YPG as well as the embargo implemented as a result of an issue over Turkey’s purchase of Russia’s S-400 missile defense system which emerged initially due to the US.

“Turkish-American relations have fallen far behind this level with the announcement of April 24,” he added.

On Saturday, Biden called the events of 1915 a “genocide,” breaking with the long-held tradition of American presidents of refraining from using the term.

Turkey objects to the presentation of these events as “genocide,” describing them as a tragedy in which both sides suffered casualties.

In 2014, Recep Tayyip Erdogan – Turkey’s then prime minister and now president – expressed his condolences to the descendants of Armenians who lost their lives in the events of 1915.