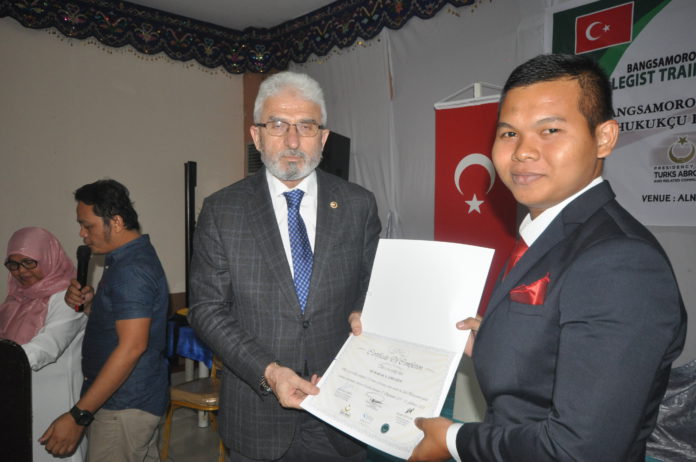 As the region received autonomous status following decades of armed struggle with a plebiscite in 2019, residents “need financial and moral support in all areas of life,” said Husnu Tuna, international project coordinator at the International Jurist Union.

Tuna, who is also a founding member of the group, told Anadolu Agency the region needs infrastructural development and facilities to provide support for the normalization of residents’ psychology.

“Institutional structures need to be established and supported to ensure that these structures meet the needs of society.

“The most effective work to be done in the region will be to introduce vocational trainings where people can earn their own food — the most productive and various production methods in the agricultural studies in the region.

Tuna was a member of a 17-person lawyers delegation that traveled to the region in 2013 and visited six Muslim populated districts on Mindanao Island.

“During that visit we found out that the region has deep-rooted ties with Turkey that went back to the late 18th century era of Ottoman Sultan Abdul Hamid,” he said, and the group has since worked to support the development of the region in several sectors.

”We have organized experience sharing program with lawyers from Bangsamoro at the Justice Academy in Turkey.”

It also hosted 20 women from Bangsamoro in the central Turkish province of Konya for a similar meeting on experience sharing regarding “local governments.”

“As the International Jurists Union, we try to support the people and the government of the region both in the field of law and other fields.”

Moreover, it provided support to establish two radio stations in Cotabato and Maravi for Muslims who did not have print, visual, or audio communication mediums.

“These radios played a vital role to get support during the 2019 Bangsamoro autonomy plebiscite process,” he said.

The lawyers’ group supports education and have brought 29 girls and 11 boys to Turkey to receive higher education. It plans to continue the program.

“They are studying in Istanbul Health Sciences University, Sabahaddin Zaim University, Ibni Haldun University and Konya Selcuk University,” said Tuna, and he added that all expenses, along with food and accommodation, are provided by the group.

He said the region needs vocational education centers, agricultural activities along with modern technologies that support quality productions in the agricultural sector and urged financial support to his group and the region.

Tuna voiced concern about “missionary activities in the region” that are directly conducted by churches.

“Institutions such as hospitals are managed by churches, and international freemasons such as Lions and Rotari are working effectively in the region, and local institutions have been created to continue the influence of the Spanish occupation of the islands in the 1500s,” the lawyer gathered from observations of the region.

Mentioning poor healthcare systems in the region, he underlined the need for “the constructions of health center and mobile health cabins in the regions planned by the Bangsamoro Health Ministry.”

Decades-long arms struggle “has a lot of orphans,” and the region needs support to build orphanages and to maintain existing ones.

The group has opened an orphanage “even though it is not in our field of activity,” he said.

The construction of Selamet Hasim University and Abdulhamit Han campus will soon begin with the support of several NGOs.

“In this respect, it is necessary to support the region in the field of education and training.”

Legal support to Muslims across globe

The jurists union, which was established in 2010 by lawyers from 42 countries to unite international lawyers, human rights activists, also provided legal support to Muslims in the region as well as in other Muslim-majority countries, including Bangladesh, United Arab Emirates and Egypt.

The lawyers met with the residents at Rabia Square and Tahrir Square in Egypt during mass protests in 2013, as well as met with supporters of Mohamed Morsi — Egypt’s first democratically elected president, whom the army ousted in a military coup — to provide legal support.

Morsi died in June 2019 while being tried on “espionage” charges.

“Events taking place in Palestine, Kashmir, Myanmar, Sudan, Central Africa are also in the main focus of the association,” he said.

“Our union is also concerned with the legal issues of the minority Muslims in various parts of the world, along with human rights abuses, inhumane treatment, arbitrary arrests and trials against Muslims, while supporting them to live in peace and tranquility in their communities,” said Tuna.

Many rights are taken away from Muslims “in a way they do not deserve,” he said, adding that Muslims are left behind economically in certain parts of the world, while their education and working rights are restricted.

Muslims are deprived of many human rights and opportunities, he added.

“For this reason, we have started our activities as part of our humanity and Islamic brotherhood duty for making them aware of national and international rights and laws, reporting to public the unfair treatment in their countries of residence, applying to international legal authorities if necessary, and sharing the professional experience in the field of law,” he said.

Tuna stressed the union is not only engaged with problems of individuals, but also deals with the issues of human communities in Muslim populated countries.