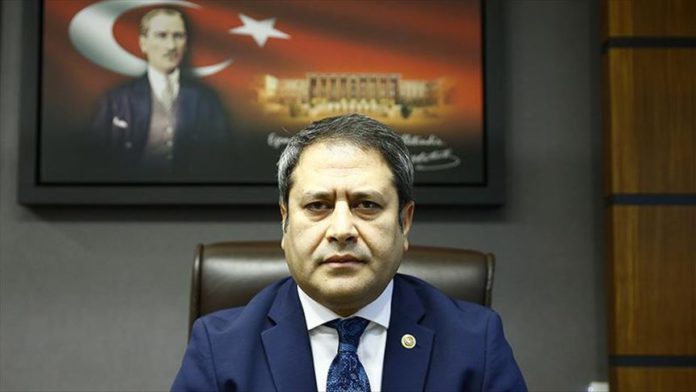 A Turkish lawmaker on Tuesday attended an event at Pakistan’s embassy in Ankara to mark India’s annexation of the disputed region of Jammu and Kashmir 73 years ago on Oct. 27, 1947, also known as the Black Day.

Speaking at the ceremony, Ali Sahin, the chairman of Turkey-Pakistan Inter-parliamentary Friendship Group, criticized international bodies such as the UN and the Organization of Islamic Cooperation (OIC) for their “silence” on the issue.

“At some point, I understand the silence of the UN but what I don’t understand is the deep silence the Islamic Cooperation Organization has fallen into. What is the OIC raising its voice for if not Kashmir?” he said.

Sahin said the commemoration of the 73rd Black Day for Kashmir meant this was the 73rd year of pain and grief for Kashmiris. “These atrocities in Kashmir are happening in front of the eyes of the free world,” he said.

The West cannot speak of having human rights if it does not want for Kashmiris the peace, development, and freedoms they themselves enjoy, he added.

Sahin underlined that safety would be unattainable in world capitals including Paris, London, Berlin, and Madrid before peace and security come to Kashmir and Srinagar.

“If you respect international law as the world’s largest democracy, we expect you to respect the decisions taken by the UN and security council on Kashmir,” Sahin said.

Asserting that Turkey would always support Kashmir, he said Kashmiris should not forget that Turkish President Recep Tayyip Erdogan always stood by them.

Ankara will defend the Kashmir issue at the highest level as its own, as it it did during the 75th session of the UN General Assembly.

He said the Turkish government would seek resolution of the Kashmir dispute on every platform to secure peace, and implement international law, the UN resolutions, and will of the Kashmiri people.

Pakistan, however, maintains that India had dispatched its forces to annex the region before any tribal force arrived there, violating the Indian Independence Act of 1947.

Islamabad accuses Singh of conspiring with the Indians and the British, saying that the plan culminated in the Instrument of Accession that was drafted in Delhi and presented to the Hindu ruler on Oct. 26, 1947.

Since then, the picturesque valley has been a bone of contention between the two nuclear arch-rivals, who have fought two full-fledged wars — in 1948 and 1965 — and a three-week Kargil skirmish on Kashmir.

While one-third of the region, known as Azad Kashmir, is administered by Pakistan, two-thirds of the disputed Himalayan valley is controlled by India.

Pakistan’s Ambassador to Turkey Syrus Sajjad Qazi also spoke at the event. He said the Black Day marked the beginning of a long night of oppression for Kashmiris under Indian occupation, and a grave human tragedy that has since continued.

“Taking advantage of the world’s preoccupation with the COVID-19 pandemic, and to perpetuate its illegal occupation of Illegally Occupied Jammu and Kashmir [IIOJK], the [Indian] BJP government has introduced illegal domicile rules in IIOJK in a bid to change the disputed region’s demography to advance its Hindutva agenda in the form of a demographic assault,” he said.

Qazi said that India had attempted to deny access to the world in the region by sealing every outlet through which Kashmiris could express themselves, and closing the offices of leading English-language dailies, the Kashmir Times and Kashmir News Service.

“We are extremely grateful for Turkey’s principled position and continuous support on the Jammu and Kashmir dispute, particularly President Erdogan for highlighting the Kashmir Issue in his address during the 75th session of United Nations General Assembly,” he said.