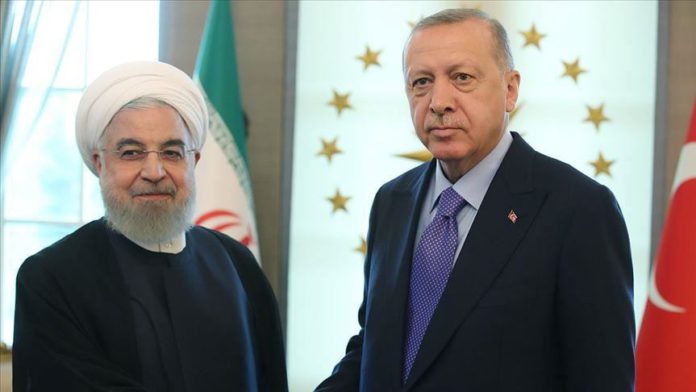 The Turkish president on Thursday spoke to his Iranian counterpart over the phone to discuss the Armenia-Azerbaijan conflict over Upper Karabakh and regional issues, including developments in Syria, according to Turkish authorities.

Recep Tayyip Erdogan and Hassan Rouhani also exchanged views on developing the Turkey-Iran relations and strengthening the cooperation in fighting terrorism, the Directorate of Communications said in a statement.

Erdogan emphasized that the attacks of Armenia — which started a crisis with its occupation of and attacks on Azerbaijani territories — against the civilian population are “war crimes,” the statement said.

He also stressed that it is important to stand at a point that distinguishes right and wrong, as well as occupied and occupying sides in this issue.

During the phone talk, Erdogan also said that besides common interests, Turkey sees the close cooperation and solidarity with Iran as a requirement of neighborly ties.

The Turkish leader said that it is necessary to act jointly against the PKK/YPG terrorist group, which threatens the unity and integrity of Syria, and to maintain the cease-fire in Idlib, adding that joint efforts to ensure stability are required to produce positive results.