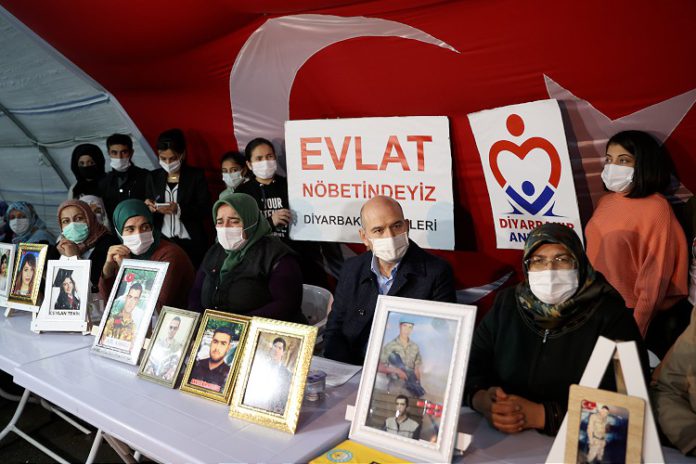 The Turkish interior minister on Thursday visited the mothers who have been protesting against the abduction of their children by the PKK terrorist group.

Suleyman Soylu met with some 185 families outside the office of the Peoples’ Democratic Party (HDP) in Turkey’s southeastern Diyarbakir province.

Soylu said these families were trying to protect their children from terrorists who take them to the mountains.

Stressing that each family fights for humanity and dignity, he heard their problems and demands.

“Here you are demonstrating the most honorable struggle of the history of humanity. We are grateful,” he said.

He noted that a total of 243 families reunited with their children last year, including 22 in Diyarbakir.

He said he hoped that many more families will meet their children in 2021.

He added that President Recep Tayyip Erdogan will meet the families soon.

The protest outside the office of the HDP — which the government accuses of having links to the YPG/PKK — began on Sept. 3, 2019 when three mothers said their children had been forcibly recruited by YPG/PKK terrorists. It has been growing every day.