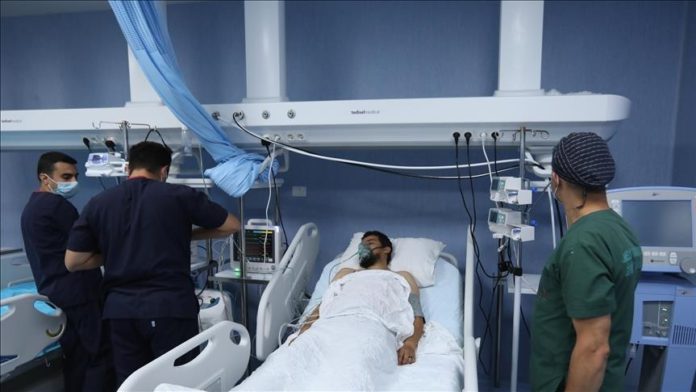 As part of Libya’s 2019 deal with Turkey on security cooperation, the TAF continues to train, cooperate and provide consulting services in Libya.

Equipped with the most modern technological devices, the Hospital serves Libyan soldiers, police and security personnel.

“All necessary medical interventions can be carried out in full for patients in a timely manner,” the hospital’s cardiovascular surgeon told Anadolu Agency.

A Libyan police officer, Nasir Muhtar Gebi, 33, recounted that the Turkish doctors at the hospital were able to save his foot from being amputated after his leg was shot during an operation on an organized crime organization in Tripoli.

The facilities Gebi went to before Mitiga Hospital all said his foot needed to be amputated.

“I thank the entire team here for their hygiene, concern and treatment. I had three operations. In the first, an outer platinum was inserted in my foot. I had the third operation for the inner platinum last Friday. Thank God, the surgeries were successful, everything is going well,” Gebi added.

Speaking to Anadolu Agency, the hospital’s chief physician said its mission was to provide “uninterrupted healthcare services 24/7 with our Libyan colleagues under the defense and security cooperation agreements signed between our country and the legitimate Libyan government.”

“It’s a source of pride and happiness for us that the personnel we’ve operated on, treated and who then recovered have returned to their duties,” he continued.

Hospital administration officials also noted that all inpatients at the hospital are first tested for the novel coronavirus, with comprehensive measures in place against the disease.

In November 2019, Turkey and Libya signed pacts on security cooperation and maritime boundaries. Turkey has aided Libya’s UN-recognized government against the attacks of warlord Khalifa Haftar.