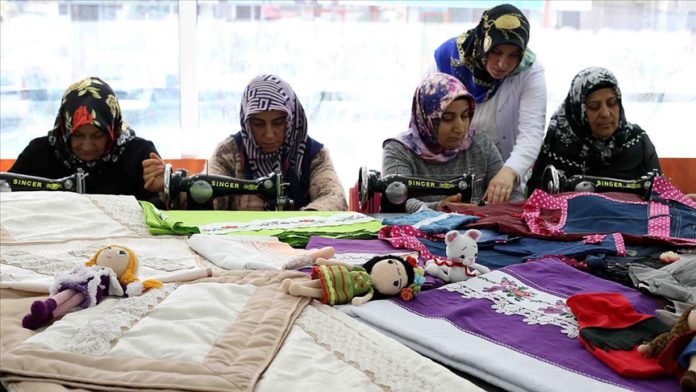 The latest designs of Turkish abayas and hijabs are gaining popularity in Pakistan.

The abaya look like a jacket or a formal coat and the hijab covers the head. They are making it easy and modern to adapt.

“Most of my customers are young girls who go to school, college or the office. They are now preferring the Turkish style abaya and hijab as they are more comfortable and easy to carry,” the 34-year-old designer told Anadolu Agency.

Due to demand and the latest trends, the designer has to launch a new collection every few months.

“In Pakistan, due to weather conditions, we have to launch a new collection after four to five months. And as the wedding season starts in winter, we get lots of orders for the festive collection. In that collection we create fancy abayas with their matching hijab, again taking inspiration from Turkish styles,” said Imran.

According to research by Pulse Consultant, a private marketing firm, the “hijab” trend — a trend from the Arab world — has nearly tripled among young urban females from ages 16 to 28 in Pakistan.

Ten years of research show that 9% of young urban girls prefer wearing hijabs outside their homes in 2008. That figure soars in 2018 to 25%. The report was released in 2019.

“The study was conducted in 14 top cities of the country and the latest data is also being ready at the moment which will be released in coming months. The data shows that numbers have increased more than double again,” Pulse Consultant CEO Kashif Hafeez told Anadolu Agency.

By carrying hijabs and abayas, women are choosing sustainable fashion that is also in their budgets.

“One casual abaya with hijab starts from 2,000 rupees ($12) and the festive collection goes to a maximum of 8,000 rupees to 9,000 rupees ($40 to $50) and the customer wears the casual abaya eight to nine hours daily and the fancy abaya four to five hours depending on the function they are attending,” said Imran.

With trends in the different Muslim countries, options and styles have expanded from the basics.

“Just four to five years ago, we only used to make abayas and hijab in black color but now after the Turkish and Malaysian trends, we have launched a range of colors because those style of hijabs look better in different colors and black absorbs more heat. That is why people are now preferring nude, white or light color hijabs,” according to Imran.

Pulse Consultant data showed almost 40% of young Pakistani urban females prefer to carry the chaddar — a big piece of cloth to cover themselves — when they go outside of their houses.

Saba Warraich, 25, who wears the abaya and hijab, said it is very easy to carry, gives a sense of security and makes her feel empowered.

“I started wearing the abaya in college. Before that, I only used to take the hijab. I have completed my MPhil in mass communication and even on outdoor projects and shootings I have always felt empowered and secure in my attire,” she said.