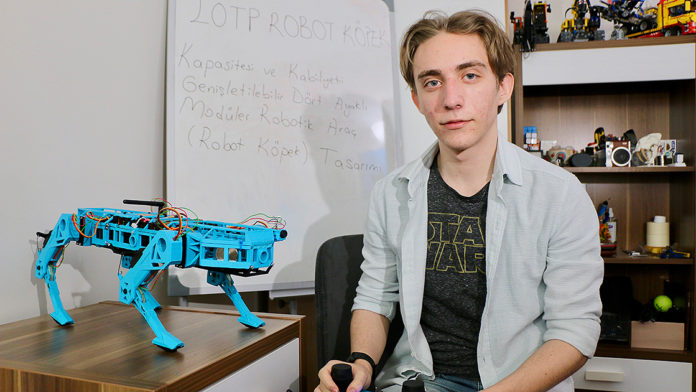 A Turkish high school student in Eskisehir province has developed a modular robot dog with his science teacher’s support.

Halit Yildirim did not want to waste the coronavirus quarantine period, during which he could not attend school due to the restrictions. Instead, he focused on developing a robot dog.

He took part in various science competitions with the multi-functional modular robot dog, including those organized by the Turkish Scientific and Technological Research Council (TUBITAK) and Teknofest — the country’s annual science and aerospace festival — and attracted the attention of many scientists.

Speaking to Anadolu Agency, Yildirim noted that his family’s support played a role in his interest in modular toys growing into a passion for developing a modular robot.

“It took me six months to develop this robot dog. Not only did I design it along with all the parts, but I also developed the software allowing it to function,” he said.

Detailing the functions of the robot dog, Yildirim said it could be customized according to the requirements of different industries, such as mining.

Hicret Koyuncu, Yildirim’s high school science teacher, who helped him develop the dog, highlighted that the main difference between this and other robot dogs is modularity.

“Modularity allows it to be used by many different domains,” she said.