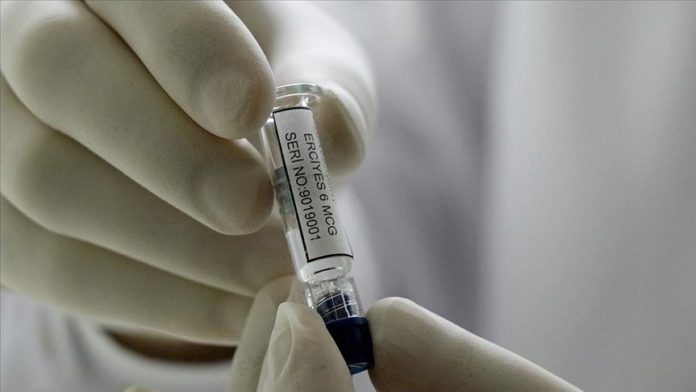 Turkey’s health minister gave an evaluation of the process and effectiveness of a domestic vaccine for COVID-19 after meeting with the Coronavirus Scientific Committee early Thursday via video link.

The COVID-19 pandemic continues to take lives in Turkey and throughout the world, and Turkey’s struggle against the disease with all its institutions continues, Fahrettin Koca said in a statement following the meeting.

Koca noted that members of the Scientific Committee, which consists of distinguished scientists of the country, have made an important contribution to the management of this process through their hard work, without expecting any rewards.

He also discussed the progress regarding an imported vaccine.

“The contract concluded discussed strategies to be carried out with the arrival of the inactive vaccine, the first batch of which is expected to arrive in Turkey,” Koca stated.

“Meanwhile, it has been stated that our promising domestic vaccine studies will play a role in resolving the problem in the medium and long term. The Phase I clinical trial of an inactive vaccine has already come to an end and is being prepared for Phase II studies. Simultaneously, with two inactive and two adenovirus-based vaccines, it is similar to a virus. The particle vaccine has also reached the Phase I stage, and after the necessary investigations, the first research products will be produced and put into use.”

“In our country, Phase III studies of an inactive [Sinovac] and an mRNA [Pfizer] vaccine are ongoing. Chronic toxicity studies of an adenovirus [Sputnik V] vaccine are being carried out before Phase III. The Phase III study of this vaccine is expected to start as soon as possible. Based on the available data, it has been stated that there are no significant side effects in the Phase III studies conducted in our country, as well as the information obtained on the reliability of the inactive vaccine,” he said.​​​​​​​

“Today, when the COVID-19 vaccine and the ability to vaccinate are at the top of the agenda, the World Health Organization has increased our determination one more time with its good news: It is our becoming a country where a virus has been eliminated,” Koca said.

Recalling that Dec. 16, 2020 is an important date in terms of Turkey’s immunization success, Koca said: “Due to the interruption of the measles virus’s circulation for three years in a row between 2017-2019 which was established by the European Regional Verification Commission, the WHO Regional Committee for Europe declared that the rubella virus in Turkey was completely destroyed, so they celebrated and said the relevant certificate will be sent next week.”

“Besides a strong primary healthcare network supported by the vaccine registration system and cold chain logistics followed online, the persistent efforts and sacrifice of our health personnel who have been working on this issue for years are the main owners of this success.

“This time, we believe that we will conduct a vaccination campaign that will be an example to the world, especially in our Family Health Centers, together with our universities, public and private health organizations and all our citizens,” he added.

Koca on Twitter stressed that they are determined to show the same success in the fight against COVID-19 as in the elimination of rubella in Turkey.

Since first emerging in December last year in Wuhan, China, the COVID-19 pandemic has claimed over 1.64 million lives in 191 countries and regions.

More than 74 million cases have been reported worldwide, with nearly 42 million recoveries, according to figures compiled by US-based Johns Hopkins University.