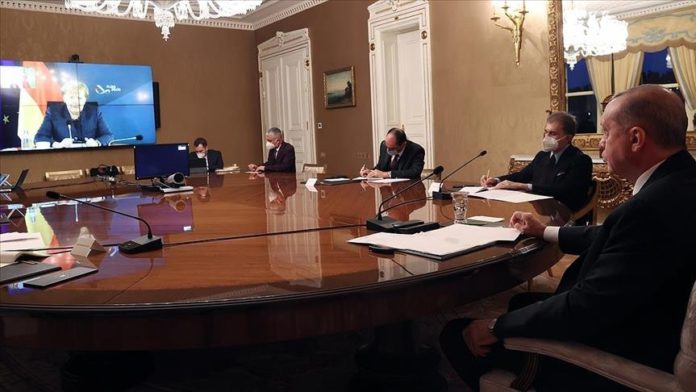 “Turkey wants to open a new page in relations with the EU,” Erdogan said, according to a statement from Turkey’s Communications Directorate.

He thanked Merkel for her constructive contribution and efforts to the Turkey-EU relations.

Erdogan praised the positive developments that took place at the latest EU Summit with the contribution of prudent leaders.

Those who want to cause a crisis in Turkey-EU relations will damage this window of opportunity that could mutually benefit the region, he added.

He stressed that updating the March 18, 2016 refugee deal is the key to maintaining the positive developments.

Turkey and the EU signed a refugee deal in 2016, which aimed to discourage irregular migration through the Aegean Sea by taking stricter measures against human traffickers and improving the conditions of nearly four million Syrian refugees in Turkey.

The deal also allowed for the acceleration of Turkey’s EU membership bid and visa-free travel for Turkish nationals within the Schengen area.

Erdogan reiterated his readiness for exploratory talks with Greece, noting that the Greek side has constantly avoided negotiations by making excuses.

The EU Summit held earlier this month condemned the partial opening of the town of Maras on Cyprus, also known in Greek as Varosha and argued that UN Security Council resolutions should be respected.

The summit also signaled that the EU may increase pressure on Ankara by adding more individuals from Turkey’s energy sector to a sanctions regime created in November 2019.

Currently, only two Turkish Petroleum Corporation executives are subject to these sanctions, which consist of assets freezes and European Union travel bans.

Ankara has sent drillships in recent months to explore for energy resources in the Eastern Mediterranean, asserting its rights in the region as well as those of the Turkish Republic of Northern Cyprus.

Russia accuses US of violating its sea border