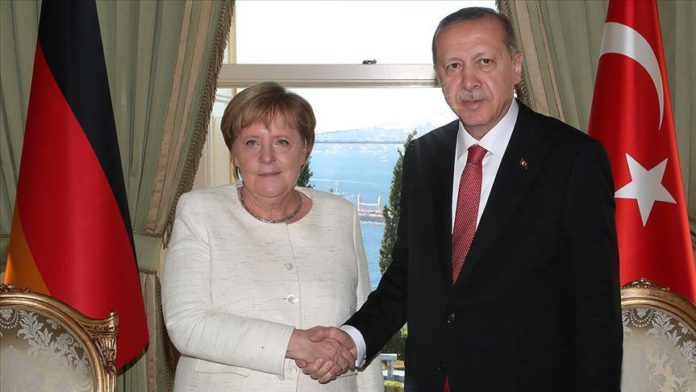 Turkey’s president on Tuesday spoke with Germany’s chancellor on a number of issues, including bilateral relations, the Eastern Mediterranean, Libya, and developments in the Azerbaijan-Armenia conflict, said Turkey’s Communications Directorate.

He added that a lasting solution may be achieved by implementing UN resolutions and following international law.

Erdogan also said a declaration from last week’s EU Leaders’ Summit lacked elements that would help overcome the problems in Turkish-EU relations and failed to lay a foundation for dialogue and cooperation.

Decrying the EU bowing down to the threats and blackmail by Greece and the Greek Cypriot administration despite Turkey’s well-intentioned stance on the Eastern Mediterranean, Erdogan stressed that the great interests of Europe must not be sacrificed to the minor interests of a few EU members.

Germany has recently tried to mediate between Turkey and Greece over their issues.

Turkey – the country with the longest coastline on the Mediterranean – sent out drill ships to explore for energy on its continental shelf, asserting its rights in the region as well as those of the Turkish Republic of Northern Cyprus.

Greece has made maximalist maritime territory claims in the region based on small islands near the Turkish coast, in defiance of international law.

Turkey has stressed dialogue to reach fair sharing of the region’s resources.

Erdogan also told the German chancellor that the gains from the calm achieved in Libya must not go to waste.