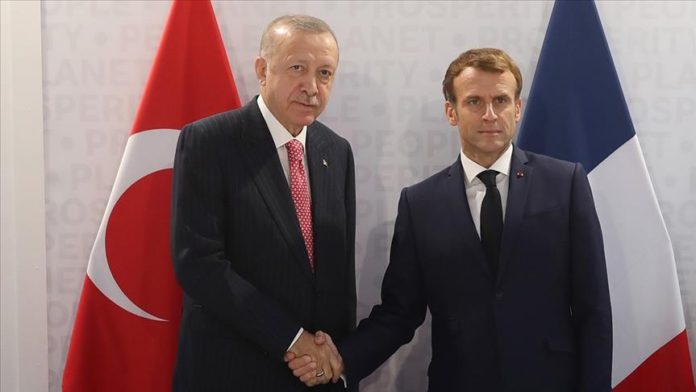 Sweden and Finland’s contacts with individuals and institutions affiliated with the PKK/YPG terror group contradict the NATO alliance spirit, President Recep Tayyip Erdogan told his French counterpart Emmanuel Macron over the phone, the directorate said in a statement.

Regional developments, including the ongoing war between Russia and Ukraine, were also discussed during the phone call, it added.

Erdogan emphasized that Turkiye wants peace and said that Ankara will continue to encourage dialogue and diplomacy between the warring countries, the statement noted.

Sweden and Finland formally applied to join NATO last week – a decision spurred by Russia’s war on Ukraine, which began on Feb. 24.

But Turkiye, a longstanding member of the alliance, voiced objections to their membership bids, criticizing the Baltic states for tolerating and even supporting terrorist groups.

On Thursday, presidential spokesman Ibrahim Kalin stated that Turkiye has made clear to Sweden and Finland during a meeting in the capital Ankara that their NATO bids cannot progress unless Ankara’s security concerns are addressed through concrete steps within a certain timeframe.

At least 3,974 civilians have been killed and 4,654 injured since the war in Ukraine began on Feb. 24, according to UN estimates. The true toll is believed to be much higher.

Nearly 6.6 million people have fled to other countries, while more than 7.7 million have been internally displaced, according to the UN refugee agency.