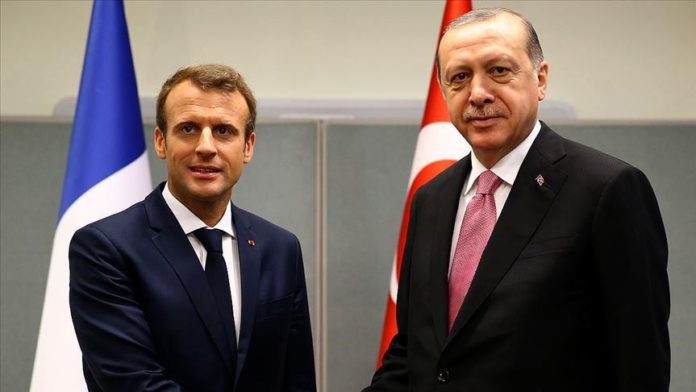 In a phone call Tuesday, the Turkish and French presidents discussed the Eastern Mediterranean, bilateral ties, and relations between Ankara and the EU.

Erdogan stressed that ignoring the legitimate rights of Turkey and the Turkish Cypriots in the Eastern Mediterranean is the reason for the tension in the region.

He also noted that diplomatic opportunities should be utilized and sustainable negotiation processes implemented to reduce the tension, the statement added.

Ankara “wants to discuss and solve all problems on the table,” he said.

According to the statement, Erdogan expects a “constructive” attitude from Paris and favors consultation and communications between Turkey and France for the sake of a regular mechanism.

Erdogan added that it is important to see “constructive dialogue and cooperation” at next week’s EU Leaders Summit for possible solution of regional issues.

The meeting, originally set for this week, was postponed to Oct. 1-2 due to a coronavirus infection close to an EU official.

The Erdogan-Macron phone call comes after top leaders from Turkey, Germany, and the European Union held a video meeting on Tuesday focusing on the recent tension in the Eastern Mediterranean.

In addition to Erdogan, the trilateral meeting included German Chancellor Angela Merkel and Charles Michel, head of the European Council.

Underlining his appreciation for Berlin’s mediation efforts, during the meeting Erdogan stressed the importance of holding a regional conference in the Eastern Mediterranean with the participation of all parties, including Turkish Cypriots, said Turkey’s Communications Directorate.

Greece, with France’s support, has disputed Turkey’s energy exploration in the region, trying to box in Turkish maritime territory based on small islands near the Turkish coast.

Turkey – the country with the longest coastline on the Mediterranean – has sent out drill ships, with military escort, to explore for energy on its continental shelf, saying that both Turkey and the Turkish Republic of Northern Cyprus have rights in the region.

Turkey to eye alternatives if F-35s not acquired