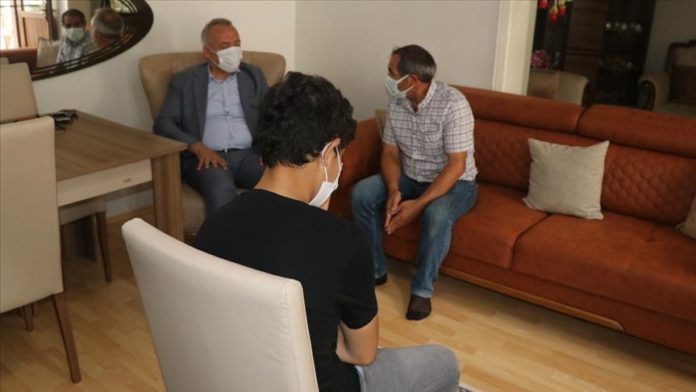 Officials from the Provincial Directorate of Family and Social Services visited Mohammad and the parents who adopted him, Hasan and Amina Bingol, for Foster Family Day.

The agency’s director, Muhammer Dogan, said a circular published in the Official Gazette said that June 30 is commemorated as Foster Family Day in Turkey.

Dogan said that the province has 57 children who live with foster families.

He gave a snapshot of Mohammad’s story, who, along with a sibling, was playing outside in Aleppo, when their house was bombarded for a second time. Without having a home to stay, Mohammad somehow ended up in Istanbul.

“After coming to Istanbul, he faced the risks of the street. After living like this for a while, he took shelter with the police,” he added.

He was handed to a child support center in Erzincan and then was placed with the Bingol family.

Dogan said Mohammad lost his mother but his father and siblings are still in Aleppo, and he talks with his family online from time to time.

“It is a very nice feeling to give a home to a child,” said Mohammad’s foster mother. “I recommend it.”

“I’m so glad that I adopted him,” she said. “For the first time in my life, I think I made the right decision. I have three sons, Mohammad became my fourth son.”

His adoptive father also said he does not separate Muhammad from his biological children. “I keep telling Mohammad that he is my son, too. May Allah be pleased with my wife, there was no problem with her being very fair.”