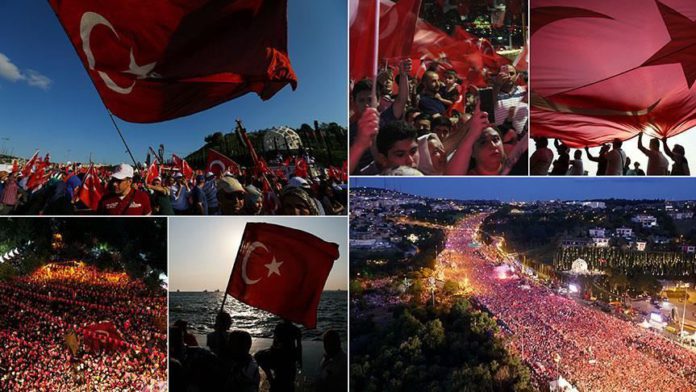 Turkey’s Foreign Ministry on Wednesday shared a video to mark the fourth anniversary of the 2016 defeated coup.

“Four years ago an attempted military coup perpetrated by FETO terrorist organization was stopped by the Turkish nation. Turkish people united against the traitors and protected their democracy. Turkish people’s #VictoryofDemocracy,” read a tweet by the ministry along with the video.

The video revolves around a young Turkish pupil studying abroad, who delivers a powerful response to his professor’s remarks on coup attempts around the world.

The professor says: “According to an article, there have been 236 successful military coup attempts since 1950. In not one, did the unarmed public who were facing an asymmetric power imbalance, demonstrate a simultaneous civil act of will against the armed forces.”

“Unfortunately, there has been no attempted coup in world history resisted and stopped solely by the nation itself.”

The student challenges the teacher’s assertion with a simple sentence: “Until the 15th of July 2016.”

“That night, the Turkish nation, old and young alike, were all united for democracy and the future of their country. They put their lives on the line, made history, and stopped the dark coup attempt,” he continued.

“The Turkish nation made history that night. This is a milestone in the history of coups, and for democracy.”

4 years ago an attempted military coup perpetrated by FETO terrorist organization was stopped by the Turkish nation. Turkish people united against the traitors and protected their democracy. Turkish people’s #VictoryofDemocracy. 🇹🇷#July15#15TemmuzDIŞ pic.twitter.com/eEHUbcYoZ1