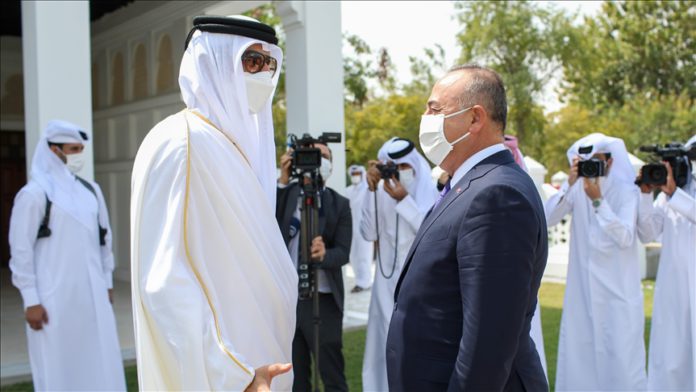 Turkish Foreign Minister Mevlut Cavusoglu on Thursday met with the Qatari counterpart and the emir in Doha.

He said he “will work with Qatar on the road to peace in Afghanistan,” stressing that the two countries’ strong cooperation serves regional peace.

📌Met with Amir Sheikh Tamim of #Qatar.
📌Welcome Qatar’s role in efforts for conflict resolution in #Syria.
📌Will work with Qatar on the road to peace in #Afghanistan too.
📌Our strong cooperation serves regional peace as well. 🇹🇷🇶🇦 @TamimBinHamad pic.twitter.com/lxkJL2hoVr

During the visit, Cavusoglu also met with his Qatari counterpart Sheikh Mohammed bin Abdulrahman Al-Thani and discussed bilateral relations and regional issues. This was their second meeting in a month.

“Continuing to support normalization in Gulf,” the Turkish minister said on Twitter, adding they will continue to further develop cooperation with Qatar in every field.

On Jan. 5, Saudi Arabia, the United Arab Emirates, Bahrain and Egypt signed a reconciliation deal with Qatar during a Gulf Cooperation Council summit to end a more than three-year feud, a move Turkey welcomed.

Earlier, Cavusoglu arrived in the Gulf state of Qatar on a two-day working visit and attended a trilateral meeting with the Qatari and Russian foreign ministers.

“In Qatar, where we came for a trilateral meeting, we discussed the developments regarding the latest situation in Syria with former Syrian Prime Minister Riyad Hijab,” said Cavusoglu on Twitter.