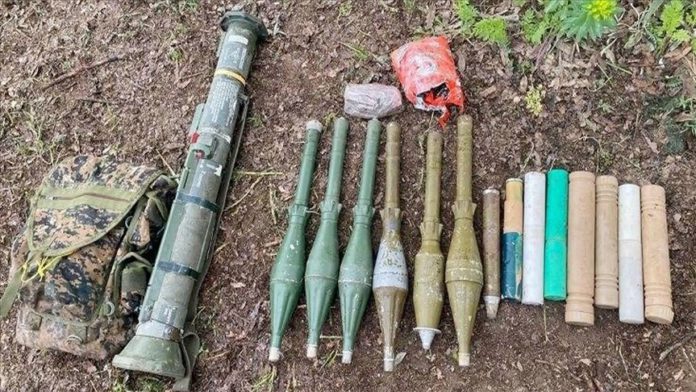 Turkish security forces found Swedish anti-tank weapons, along with other arms and ammunition, in a cave used by PKK terrorists in northern Iraq.

Turkish commandos stormed the cave as part of the ongoing Operation Claw-Lock, which is continuing with full force despite harsh weather conditions and difficult terrain, the National Defense Ministry said in a statement on Wednesday.

A group of terrorists holed up in the cave was neutralized after they opened fire on the Turkish forces, who had announced their presence and called on the terrorists to lay down their arms.

Several other caves in the area were also raided as Turkish forces have intensified operations after five Turkish soldiers were recently killed in action.

Swedish-made AT-4 anti-tank weapons were discovered, along with several other types of weapons and ammunition, according to the ministry.

One of the hideouts was a multistory cave that was divided into rooms and had stairs connecting the different levels, the ministry added.

Since 2020, Turkiye has launched successive operations against PKK terrorists hiding in northern Iraq.

Operation Claw-Lock, the most recent, was started in April to target PKK hideouts in Iraq’s Metina region, following Operations Claw-Tiger and Claw-Eagle.

In its more than 35-year terror campaign against Turkiye, the PKK – listed as a terrorist organization by Turkiye, the US, and EU – has been responsible for the deaths of over 40,000 people, including women, children, and infants.