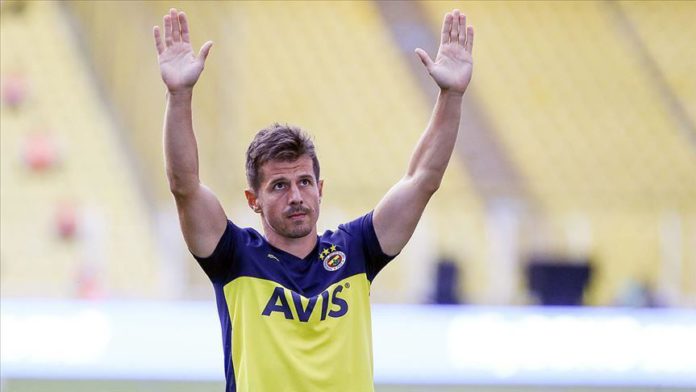 Emre Belozoglu, one of Turkey’s most famous football players, announced his retirement on Saturday.

The 39-year-old Fenerbahce captain ended speculation about his future in an emotional letter sent to Anadolu Agency.

“Every moment was precious. Thank you!” wrote the influential midfielder.

He thanked the fans, players, managers, directors, and staff of all the clubs he represented in his over two-decade career – Turkish teams Zeytinburnuspor, Galatasaray, Medipol Basaksehir, and Fenerbahce, Italian side Inter Milan, England’s Newcastle United, and Spanish club Atletico Madrid.

He paid rich tributes to Fenerbahce, terming it “the Great Fenerbahce” and saying that he was leaving a “dream and a love.”

“What a great honor to play in your [Fenerbahce] shirt,” said Belozoglu, adding that it always felt “special” to be a Fenerbahce player.

Expressing gratitude for their support, the Turkish international said he will never forget the love he received from Fenerbahce fans.

“I also thank all my directors, managers, club employees and players at Fenerbahce. It was a big honor to compete alongside you in Fenerbahce’s iconic striped jersey,” Belozoglu said, adding that he was leaving the game with memories of joy and sorrow.

The tenacious midfielder, who boasted an enviable mix of physical strength and technical ability, was a constant threat to opponents in the center of the park.

Belozoglu also won the UEFA Cup with Galatasaray in 2000.

He made 101 appearances for the Turkish national side, scoring nine goals, and was part of the famous team that won the bronze medal at the 2002 FIFA World Cup.