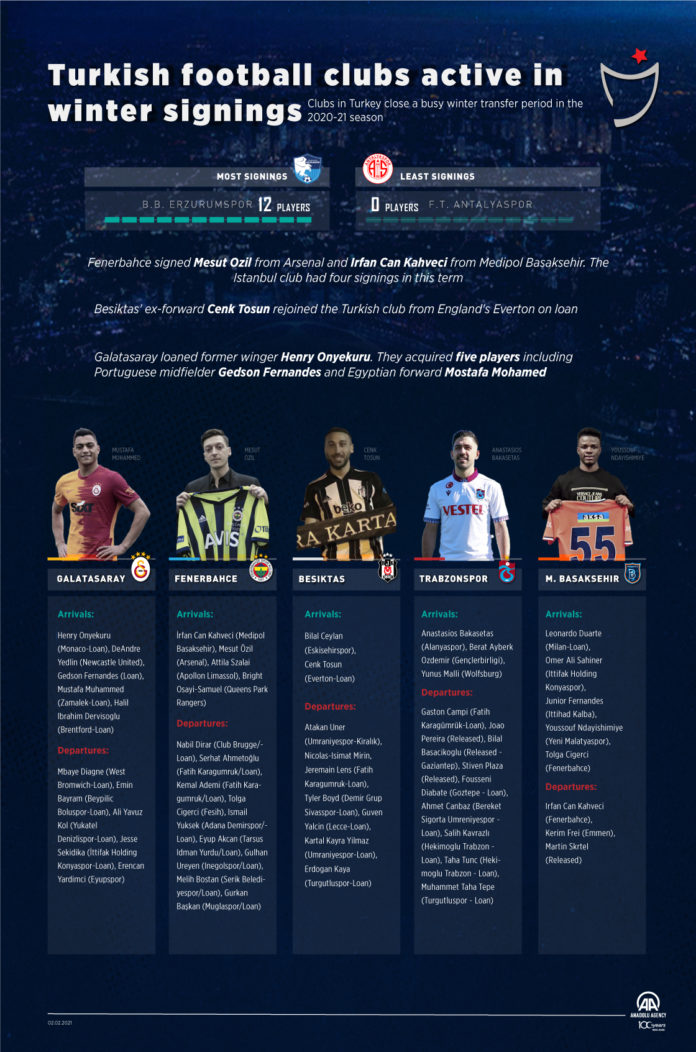 Despite facing some financial struggles caused by the ongoing coronavirus pandemic, the Turkish football clubs had busy days to sign new players in the 2020-21 winter transfer window.

One of the most respected attacking midfielders Ozil, 32, made his way from English club Arsenal to Fenerbahce. The Turkish club signed him on a free transfer.

Before his seven-and-a-half-year spell in London, Ozil played for Spain’s Real Madrid to win the 2012 Spanish La Liga title.

Hundred of thousands of people tracked his flight on a real-time flight app “Flightradar24” when he came from London to Istanbul on a private jet.

The German star of Turkish descent penned a three-and-a-half-year deal with Fenerbahce on Jan. 24.

In addition to Ozil, Fenerbahce acquired Irfan Can Kahveci from Medipol Basaksehir to strengthen the team’s midfield position.

Kahveci is one of the most important Turkish players for the center of the park. Fenerbahce and archrivals Galatasaray competed against each other for him. Kahveci eventually signed for Fenerbahce.

Hungarian defender Attila Szalai from Apollon Limassol and Queens Park Rangers’ winger Bright Osayi-Samuel were other signings for the Yellow Canaries to be competitive in the title race until the end of the season.

In this process Fenerbahce let their Moroccan winger Nabil Dirar go to his ex-club in Belgium, Club Brugge last weekend.

Besides, Turkish talent Dervisoglu, 21, joined from English Championship club Brentford FC on loan until the end of this season.

On Monday Galatasaray completed the signing of three players, Yedlin, Fernandes and Mohamed.

Yedlin joined the Lions on a free transfer from Newcastle United. Fernandes was loaned from Benfica until the end of the season.
Mohamed was another signing for Galatasaray on the final day of the winter transfer window.

Galatasaray acquired the 23-year-old player from Zamalek Sporting Club on a one-and-a-half-year loan deal with an option to buy.

On Monday the Black Eagles signed the 29-year-old on loan from England’s Everton.

The Black Sea club Trabzonspor got three midfielders in the winter transfer window.

Trabzonspor had two attacking midfielders near the end of the winter transfer window.

Buyuksehir Belediye Erzurumspor had the most signings during the Super Lig’s winter transfer window.

The club from east Turkey had 12 players.

Meanwhile, a club from the Turkish Mediterranean, Fraport TAV Antalyaspor, did not sign any player in the 2021 winter.