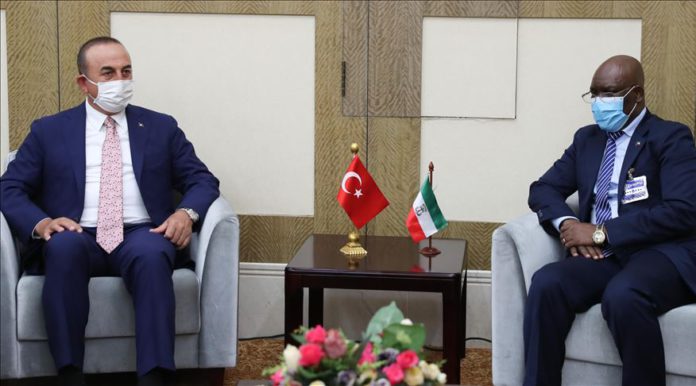 Turkey attaches importance to the development of economic relation between itself and Equatorial Guinea, according to Ankara’s foreign minister on Tuesday.

Mevlut Cavusoglu said Turkey’s Embassy in Malabo will be inaugurated Wednesday, during a news conference alongside his Equatorial Guinean counterpart Simeon Oyono Esono Angue on his last leg of a three-nation West African tour.

He said Turkish company Summa established a congressional center in Malabo and it “shows the quality of the works done by Turkish companies. We believe that you will include Turkish companies within the framework of the 2035 development plan. We need to encourage them together.”

Cavusoglu said negotiations on a free trade agreement and mutual protection and promotion of investments are keys to increasing Turkish investment in the West African country.

“We forwarded our drafts to Equatorial Guinea, we are waiting for a reply. We want to complete and sign the negotiations in a short time,” he said.

After defeating a 2016 coup attempt by the Fetullah Terrorist Organization (FETO), the Turkish government set up the Maarif Foundation to give administration to schools linked to FETO, which the terror group uses as a revenue stream.

FETO and its US-based leader Fetullah Gulen are accused of orchestrating the defeated coup, which left 251 people martyred and nearly 2,200 injured.

Angue said Turkey sent medical aid Tuesday amid the novel coronavirus pandemic. “This shows how friendly and cooperative model country that Turkey is,” he said. “I would like to thank Turkey and the Turkish people for donating this aid to support our struggle against the COVID-19. With these donations, we will strengthen our health infrastructure.”

He called for Turkish companies to continue investments in Equatorial Guinea.

Following talks Monday in Togo, Cavusoglu arrived in Niger on the second stop of a three-nation West African tour that concluded in Equatorial Guinea.

Under President Recep Tayyip Erdogan’s leadership, Turkey has pursued an unprecedented outreach to Africa based on the principle of a win-win.

As part of the Turkey’s cooperation with Africa, the government has donated millions of dollars to infrastructure development on the continent and sponsored hundreds of African students.

Turkey’s presence is felt across the continent, where there are a number of Turkish organizations, including the Turkish Cooperation and Coordination Agency (TIKA), Maarif Foundation and Yunus Emre Institute, among others.

August 27, 2020
We use cookies to ensure that we give you the best experience on our website. If you continue to use this site we will assume that you are happy with it.Ok