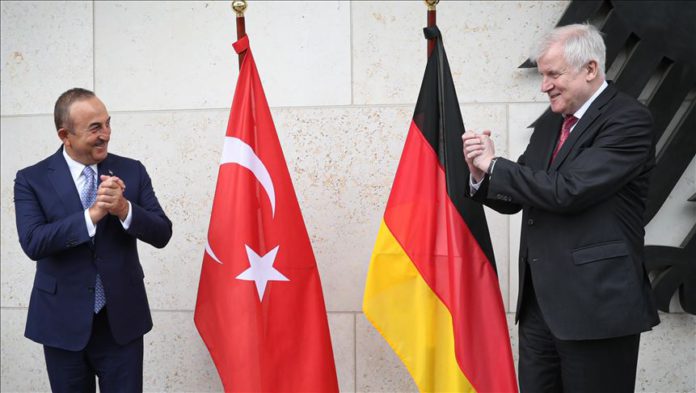 Turkey’s foreign minister and German interior minister met Thursday in Berlin to discuss a number of issues.
“During our meeting with Interior Minister [Horst] Seehofer, we discussed healthy and safe visit of German citizens to Turkey,” according to Mevlut Cavusoglu on Twitter, who said they also discussed joint fight against FETO and PKK terrorist organizations which also possess thereat to Germany, irregular migration, and racist attacks against Turkish community in Germany.The top Turkish diplomat’s visit to Germany had on the agenda a series of talks with Foreign Minister Heiko Maas and Seehofer.
In its more than 30-year terror campaign against Turkey, the PKK – listed as a terrorist organization by Turkey, the US and EU – has been responsible for the deaths of 40,000 people, including women, children and infants. The YPG is PKK’s Syrian offshoot.
FETO and its US-based leader, Fetullah Gulen, are accused of orchestrating the defeated coup of July 15, 2016, which left 251 people martyred and nearly 2,200 injured in Turkey.
Ankara also accuses FETO of being behind a long-running campaign to overthrow the state through the infiltration of Turkish institutions, particularly the military, police and judiciary.