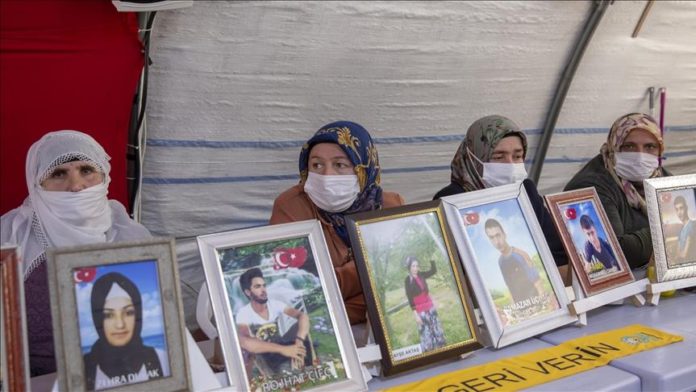 Turkish families whose children were abducted or forcibly recruited by the PKK terror organization continued their sit-in protest on Wednesday in southeastern Diyarbakir province for a 590th straight day.

The protest began on Sept. 3, 2019, when three mothers said their children were forcibly recruited by PKK terrorists.

A sit-in outside the offices of the Peoples’ Democratic Party (HDP), which the government accuses of having links to the PKK, has been growing in Diyarbakir and recently spread to other provinces, including Mus in the east and Izmir in the west.

Families in Diyarbakir had a video call on a smartphone with those in front of the HDP’s office in Izmir and reinstated their commitment to being reunited with their children.

Hayriye Akyuz, who has been protesting to be reunited with her brother Ensari Karasan, said the HDP participated in the PKK’s abduction of children and minors.

She encouraged her brother to lay down his weapons and surrender to Turkish security forces. “I beg you to come back home. We didn’t give up on you. So, please don’t give up on us,” she said.

Salih Gokce from the eastern province of Agri said the HDP took part in his son’s abduction and he wants Mehmet back from the HDP.