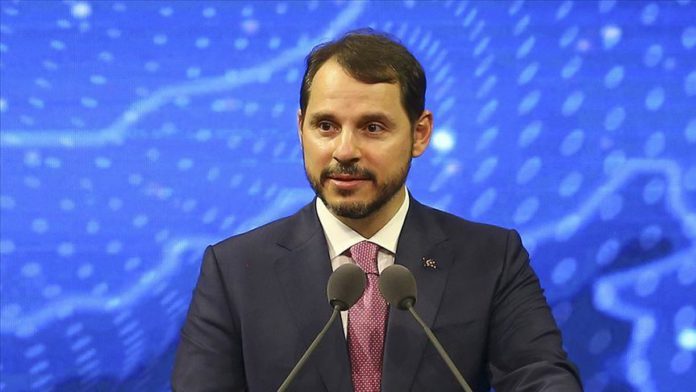 Turkey’s exports will grow stronger every day as the country enters a new era despite the coronavirus pandemic, a top official said Monday.

“We’re taking firm steps forward in our economic transformation journey with the goal of more production and employment and more exports,” Treasury and Finance Minister Berat Albayrak said on Twitter.

Albayrak pointed out that in October, exports rose 5.6% compared to the same month last year and 8.3% compared to last month, reaching $17.3 billion.

Data from the Purchasing Managers’ Index (PMI), as well as production and new orders figures in the manufacturing industry, have been increasing for five months in a row, and this increase accelerated in October with the help of new export orders, he added.

The PMI data for the manufacturing sector rose to 53.9 in October from 52.8 in the previous month.

Turkey’s PMI for the manufacturing sector is seen as an important gauge in tracking the health of the sector, with values below 50 points showing contraction while those above indicate expansion.

Firms are increasing employment to support production, he said, adding that the employment generation rate in the sector reached its highest level since February 2018.

The increase in production that comes with employment indicates that the growth in the industry is sustainable and permanent.

Albayrak also said that there continue to be positive developments in domestic production, with more than half of automobile and light commercial vehicle sales in September produced domestically for the first time in 20 years.

This rate at the end of 2017 was 35.6%, Albayrak said, adding: “With the support provided by the competitive exchange rate, new records are expected to be broken in the share of domestic automobile sales in total sales for the rest of the year.”

Noting that this February inflation was 12.37%, before the pandemic struck, Albayrak said: “Despite the cost pressure created by the effects of the pandemic, inflation is still below this level.

“Our goal in 2021 will be to reduce inflation to the single digits.”

Oil up over fresh US coronavirus relief bill talk hopes