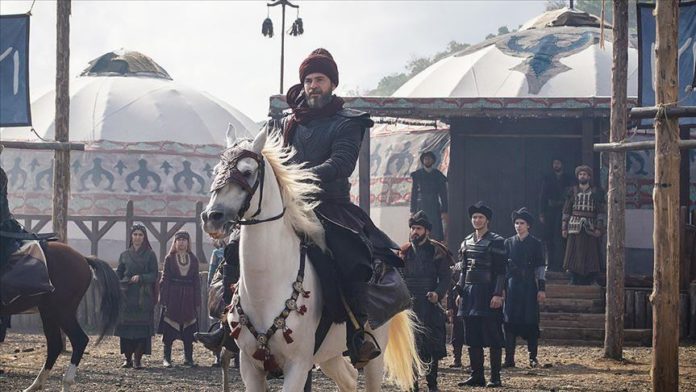 The Turkish television series Dirilis (Resurrection) Ertugrul, based on the life and times of the 13th-century Muslim Oghuz Turk leader, Ertugrul, has taken Pakistan by storm.

According to the state-run Pakistan Television (PTV), 133.38 million people have so far watched the drama series from April 25- May 14. Also, its episodes are trending on YouTube in Pakistan every day.

In just 20 days, since the series with Urdu dubbing started riding on the airwaves, PTV’s YouTube channel has registered exponential rise its viewership with 2.1 million subscribers, shattering all previous records.

With growing popularity, these numbers are expected to climb up further in the coming days.

The state-run TV, which started airing the show under an arrangement with Turkish Radio and Television (TRT), is making it accessible to a far greater audience and igniting public interest.

PTV launched the first episode on April 25, the first day of the holy month of Ramadan. The series was dubbed in the Urdu language at the instructions of Prime Minister Imran Khan, who had expressed interest in the series last year during his tour to Turkey.

“During the lockdown, I am watching the seasons regularly. The faithful and fearless figures of Ibn Arabi from Andalusia and the Knight Claudius who later embraced Islam and became Umar are my favorites,” said Mohammad Ibrahim Qazi, grandson of the late Qazi Hussain Ahmad, the leader of the Jamaat-e-Islami party.

Like many other countries, Pakistan had enforced a countrywide lockdown in March, to stem the spread of COVID-19 pandemic. The series come handy to keep people indoors.

“First I heard from Prime Minister Khan suggesting people to watch the series. Then I decided to see the drama and since then I have not missed any of its episodes,” Shaista Khan, a school teacher from Dir, a district of northwestern Khyber Pakhtunkhwa province told Anadolu Agency.

She said the Ertugrul was perhaps the first series after a long time that can be watched with the whole family sitting together. It also imparts historical knowledge to kids, she said.

Often described as the Turkish Game of Thrones, the series depicts the 13th century Anatolia and tells the story before the establishment of the Ottoman Empire. It illustrates the struggle of Ertugrul Gazi, father of the empire’s first leader.

“I take it as a positive development for our cultural and literary enrichment. Today, when we say globalization in terms of people to people contact Ertugrul, is one such move to bring people of Pakistan and Turkey much closer,” said Syed Fakhar Kakakhel, Islamabad based journalist who writes on art and culture.

The series that has attracted millions of viewers in a short period, has also opened new avenues for the entertainment industry in the country.

“Pakistanis will have a change of heart after reconnecting with the glorious past in medieval age. There is a natural tendency to get away from Bollywood. Turkish multimedia industry is replacing the craze for Bollywood and is successfully carving a niche in Pakistan,” said Qazi.

He said the popularity of Turkish serials in Pakistan is an ideal case for both countries to join hands in the multimedia sector to combat rising instances of Islamophobia across the world.

“In our neighborhood in India, such historical movies have collected lots of revenue. Pakistan and Turkey can have a joint venture to produce contents based on history,” said Kakakhel

Ertugrul series is based on glorious times of Muslims which is our shared culture. That is why it has attracted such a large viewership in Pakistan,” he added.

Last month, before the PTV started broadcasting the historical series, Prime Minister Khan asked viewers to watch it as it showcases the values and history of Islamic culture.

“A third-rate culture was being promoted in Pakistan through Hollywood and Bollywood. I want our children and youth to learn the difference and to show that we also have our own culture,” he said, while referring to the Ertugrul series.

“We have a culture with romance and history as well, however, it is also filled with Islamic values. Sadly, the content from Bollywood is full of vulgarity, which was not the case three or four decades ago,” he added.

The series is particularly making waves among young Pakistanis.

“Thanks to PM @ImranKhanPTI for arranging this #ErtugrulUrduPTV #Ertugral gives a source of Motivation & Inspiration to learn & Implement the core Islamic values, it boosts the moral that we can overcome any challenges by our strong will, faith & with help of Allah,” wrote a Twitter user engineer Salman Ahmad Khan.

Last September, Turkey, Pakistan, and Malaysia had agreed to combat the rising global trend of Islamophobia, mainly in the West. They had decided to launch a television channel dedicated to confronting challenges posed by Islamophobia and to produce films on Muslim heroes.