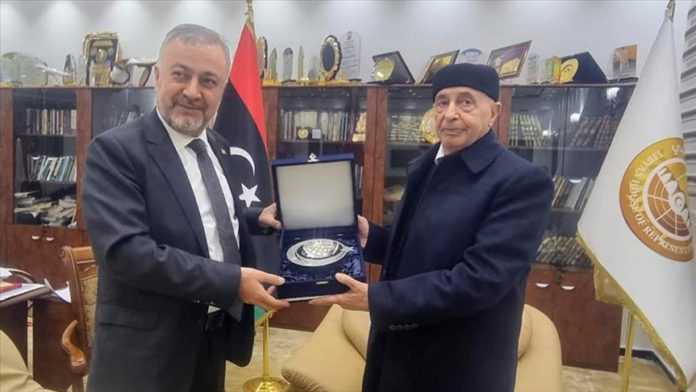 Turkiye’s envoy to Libya met on Wednesday with the Libyan parliament speaker Aguila Saleh in his hometown of al-Qubah.

Speaking to Anadolu Agency after the meeting, Ambassador Kenan Yilmaz said he visited the eastern city after receiving an invitation from Saleh, confirming that the visit was fruitful.

“During the meeting, we expressed our willingness, when conditions are suitable, to reopen our consulate-general in Benghazi, to evaluate the resumption of the Turkish Airlines’ flights to Benghazi and to encourage our companies to complete their unfinished projects, as well as implementing new ones,” said Yilmaz.

He also said he plans to soon visit Benghazi, stressing the importance of achieving Libya’s national reconciliation and hold elections based on a consensus among Libyan parties.

Turkish Foreign Minister Mevlut Cavusoglu said in December that Turkiye does not differentiate between the west and the east of Libya and that Yilmaz would visit eastern Libya to meet with officials.

In 2014, Turkiye closed its consulate in Benghazi under security tension following an offensive by warlord Khalifa Haftar to take Libya under his control. Haftar failed in those attempts and retreated to eastern Libya.

Libya’s presidential elections were scheduled for Dec. 24 under a UN roadmap but the country’s election commission proposed a one-month delay, citing inadequacies in electoral legislation and appeals related to the eligibility of candidates.

The vast majority of Libyans hope the upcoming elections will contribute to ending the armed conflict that has plagued the oil-rich country for years.