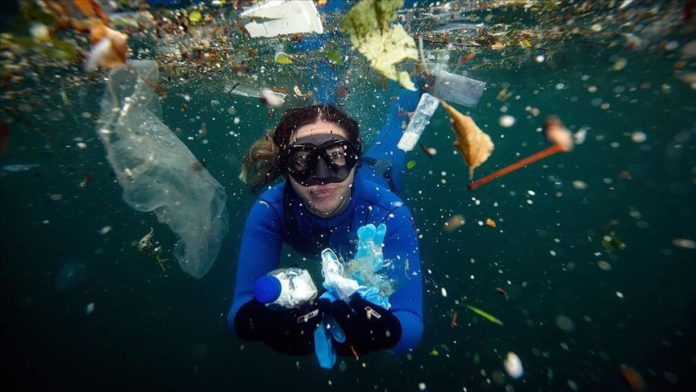 Turkey’s multiple world-record holder Sahika Ercumen dived into the Bosphorus Strait on Tuesday to raise awareness about plastic pollution in the seas.

She has been declared the Underwater Life Advocate for Turkey by the UN Development Program on the occasion of Maritime and Cabotage Day which is marked on July 1.

Speaking to Anadolu Agency ahead of her dive, she said the protection of seas and endangered species has always been a priority for her and she has been part of many similar projects.

“Together we decided to start many projects to protect the oceans and seas both in our country and in the world. We will perform the first of these by cleaning the Bosphorus. This is a long-term project,” she said.

Touching on the increasing amount of plastic waste in the seas, Ercumen highlighted that she has been swimming with plastics more than fish in recent years.

“The waste from gloves and masks in the sea has risen in the coronavirus period. They also end up in the sea due to rains and winds,” she said, adding they pose a great risk not just to animals but also humans.

Citing that every year 8 million metric tons of plastic enter the ocean, Ercumen said this affects the air people breathe in.

She went on to say she posed for photos with a gas mask on her drive through Istanbul to highlight growing air pollution levels.

Ercumen was part of a Turkish team which traveled to Antarctica on a science expedition.

She became the first Turkish woman to dive without air tanks in Antarctica last year in February.

She stayed underwater at zero degree Celsius for two minutes without any equipment to protect from the cold.

Separately, Ercumen set a world record in women’s cave diving without fins last October as she dove 100 meters in the icy waters of Gilindire Cave in Turkey’s southern province of Mersin.