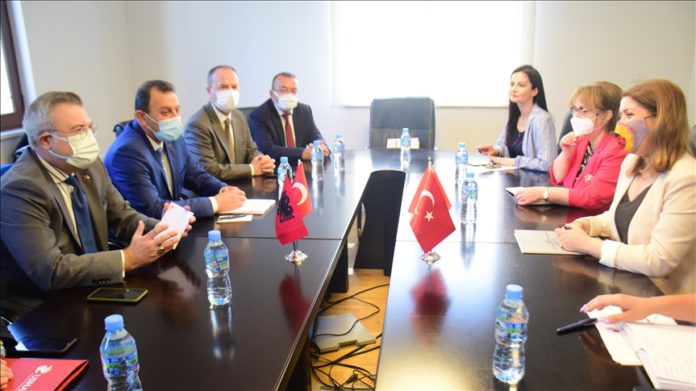 A delegation from Turkey’s Health Ministry visited Albania on Wednesday.

The delegation toured the Turkey-Albania Fier Friendship Hospital, which was built with the financial support of Turkey.

Turkey’s Ambassador to Albania Murat Ahmet Yoruk said the delegation was received by Albanian Health Minister Ogerta Manastirliu. Technical meetings were held between the delegations of the health ministries of the two countries.

“One is to finalize the cooperation protocol regarding the functioning of the Turkey-Albania friendship hospital. Another is to initiate new cooperation between the drug and device agencies of the two countries, which was agreed upon during the official visit in Ankara. For this, we continue our negotiations,” he said.

“Also, we have an organization called USHAS under our Ministry of Health. Through this organization, we have now started to discuss various cooperation opportunities between the two countries in the field of health tourism with the authorities of the Albanian Ministry of Health. We will discuss the possibilities of the union, and talks will be held between our delegations at the technical level.”

He added that the delegation will meet with Manastirliu again on Friday and evaluate the results of their work.

The Turkey-Albania Fier Friendship Hospital has begun operations to reinforce the long-standing brotherhood between Albania and Turkey.

The hospital was completed in just 68 days in the southwest city of Fier after the idea for the facility came during Albanian Prime Minister Edi Rama’s Jan. 6 visit to Turkey.