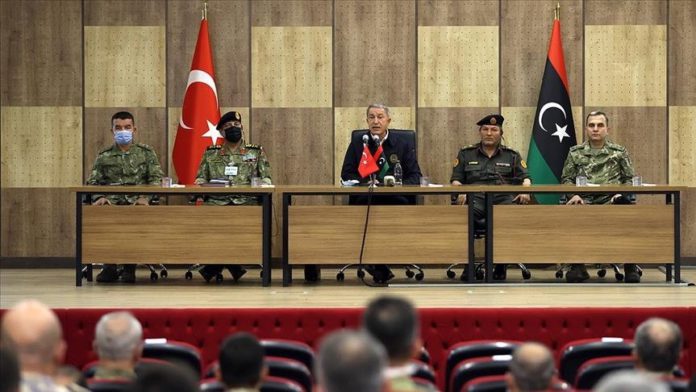 Turkey’s national defense minister has reiterated his country’s support for Libya during a high-level visit to the country ahead of Monday’s NATO summit.

Addressing the personnel at the command, Akar emphasized the long-standing friendly ties between Turkey and Libya.

He said the “enviable fraternal relations” between the two countries will “continue at an increasing pace from now on.”

Noting that Turkey will continue to do what needs to be done for the unity, integrity, and security of Libya, Akar added: “The reason we are here must be understood very well.”

A high-level delegation from Turkey visited Libya on Saturday upon the instructions of Turkish President Recep Tayyip Erdogan.

The delegation met with Khalid al-Mashri, president of the High Council of State, Mohamed al-Menfi, the head of the Presidential Council, Prime Minister Abdul Hamid Dbeibeh and Minister of State for Communications and Political Affairs Ammar Al-Lafi and, Cavusoglu said on Twitter.

Libya has recently witnessed positive developments following a breakthrough on Feb. 5 when rival parties agreed on a unified new executive authority to govern the country until elections on Dec. 24.

Libyans hope the new government will end years of civil war that have ravaged the country since the ouster and killing of strongman Muammar al-Qaddafi in 2011.