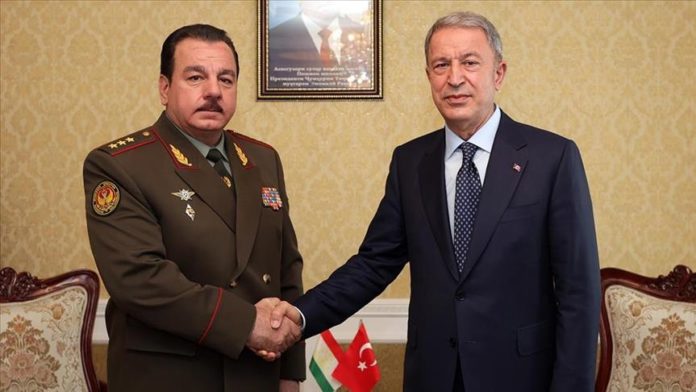 The Turkish defense minister on Wednesday met with his Tajik counterpart in Dushanbe, the capital of Tajikistan.

Hulusi Akar is in Tajikistan on an official visit.

Akar was received by his Tajik counterpart Col. Gen. Sherali Mirzo with a military ceremony at Tajikistan’s Defense Ministry.

After the ceremony, Akar and Mirzo first had a one-on-one meeting and then chaired a meeting between the Turkish and Tajik delegations.

During the meeting, the defense ministers discussed bilateral and regional defense and security issues.

Underlining important historical, cultural, and religious ties between the two countries, Akar said Tajikistan is an important partner for Turkey in Central Asia.

Celebrating the 30th anniversary of Tajikistan’s independence, Akar said Turkey is ready to deepen its cooperation with Tajikistan in defense and security areas and to share experience on border security and counter-terrorism.

Akar also stressed the importance of the current constructive cooperation between the two sides in the fight against the Fetullah Terrorist Organization (FETO) — the group behind the defeated 2016 coup in Turkey.

Mirzo, for his part, underlined the importance of further increasing the cooperation between the armed forces of the two countries.

He also stressed the successful cooperation between the two countries in international and regional forums.