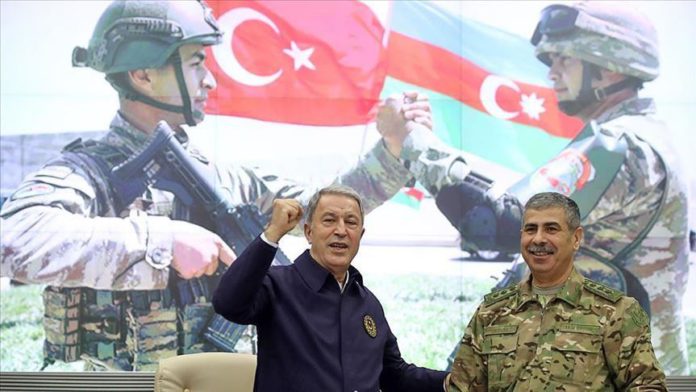 The Turkish defense minister on Wednesday visited Azerbaijan’s Defense Ministry in the capital Baku and hailed the liberation of territories from Armenian occupation.

Relations between the ex-Soviet republics have been tense since 1991 but fresh clashes erupted on Sept. 27.

On Nov. 10 both the countries signed a Russia-brokered agreement for a long-term and comprehensive solution to the three-decade-long conflict.

The deal declared a complete cease-fire and end to over six weeks of fighting. Baku freed nearly 300 settlements, including the strategic city of Shusha, during this period.

“The present situation is very pleasing for us. This operation is an awakening… Azerbaijani army has shown its power to the whole world,” Akar said.

He said the relationship between Turkey and Azerbaijan will last forever as “two states, one nation.” Both Azerbaijan and Turkey are Turkic nations and share deep political, historical, and cultural relations.

The heroism and courage Azerbaijani forces showed in the 44 days of operation is worth being told for 44 years, the defense minister said.