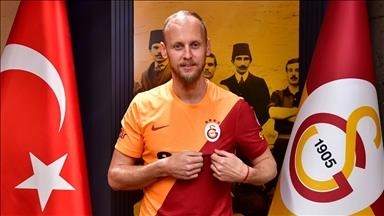 Kaya started his career with Galatasaray during the 2008-2009 season and won four league titles with the Istanbul team by the 2017 campaign.

He moved to the Czech team Sparta Prague at the beginning of the 2017-2018 season.

Kaya returned to Galatasaray on loan for a second stint in January 2019, helping then win the league title at the end of the season.

After he returned to Turkiye from Sparta Prague in 2020, the 30-year old made appearances for Yeni Malatyaspor, where he spent one and a half seasons.

He also made 23 appearances for the Turkish national team.

In addition to Kaya, Galatasaray also announced the signing of Chilean midfielder Erick Pulgar from Fiorentina.

Galatasaray chairman Burak Elmas previously confirmed that Pulgar joined the club on loan until the end of the season.

He helped Chile win the 2016 Copa America title and scored four goals in 37 matches for his country.