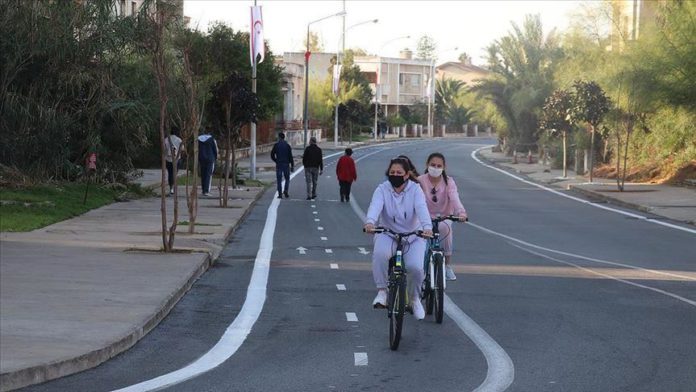 Changes are underway in the newly reopened town of Maras in the Turkish Republic of Northern Cyprus (TRNC) after being closed for nearly 50 years.

Since the town’s partial reopening to public use on Oct. 8, roughly 67,500 people including local and foreign tourists from Greece, the UK and other countries visited the strip of coast, which lies in the city of Gazimagusa, also known as Famagusta, authorities said.

Gazimagusa’s Mayor Ismail Arter told Anadolu Agency that efforts have been stepped up to open Maras and have not been sidetracked by the novel coronavirus outbreak.

“After intensive work in the city, a route of about four kilometers [2.5 miles] and public roads were opened for people to visit on Oct. 8, provided weather is normal in the city,” said Arter.

Underlining that Gazimagusa wanted Maras, often described as a “ghost town” to become a living city, noting that repairs began in the city with help from the city municipality of Konya in central Turkey, Turkey’s public housing body and private firms in the TRNC.

Arter said that since Oct. 8, damaged roads had been repaired, adding: “We’ve done landscaping and planting work that should be done in a city.”

Stressing that private homes and property would not be impacted by the repair efforts until the necessary administrative planning was complete, Arter said that work continued on transportation in the town, with bicycles available for visitors to tour the streets thanks to Konya’s donations.

He said city-cleaning efforts were also underway in the areas in Maras that remain closed, adding that reopening these areas as well would be an administrative issue.

On the occasion of the 37th founding anniversary of the TRNC on Nov. 15, Turkish President Recep Tayyip Erdogan visited closed Maras, announcing that a commission would come into action to return property in the town to their “real owners.”

Accompanied by Turkish Cypriot President Ersin Tatar, Erdogan said that applicants, including those from the Greek Cypriot administration, could have their assets in Maras returned through the Immovable Property Commission.

On June 18, 2019, the TRNC launched efforts to open Maras, which has been closed since 1974, and have an expert team conduct inventory surveys in the town, which began the following month.

Cyprus has been divided into the TRNC in the north and Greek Cypriot administration in the south since a 1974 military coup that aimed to annex Cyprus to Greece.